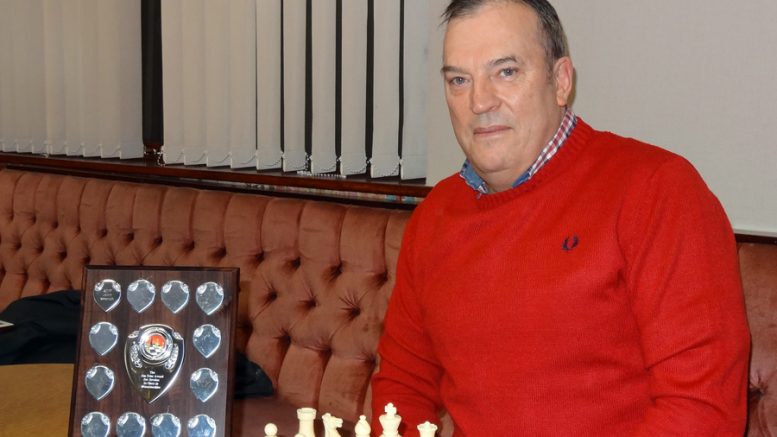 John Wrench was the first recipient of the Jim Friar award for Services to Worcestershire Chess at a presentation last Wednesday at Habberley Social Club, Kidderminster.

John is the secretary of Kidderminster Chess Club and captain for Worcestershire first team. He has been a stalwart of his club and a Worcestershire County team player for many years. In recent years John helped found the Bewdley St Anne’s Community Chess Club and he helps organise its annual chess congress in aid of Bewdley charities.  John has promoted chess in schools and is the West Midlands organiser for the national charity Chess in Schools and Communities (CSC). John is a volunteer tutor for CSC in several schools that teach logical thinking and planning using the medium of chess moves.  As a qualified English Chess Federation chess coach, John coaches at King’s School Worcester St Alban’s.

The Jim Friar award was given to Worcestershire Chess Association by Jim’s family after Jim’s untimely death in 2016. It is very fitting that the first recipient should be from Jim’s own club and coaching junior players, two themes that ran through Jim’s life.

In Division 1 of the Worcestershire Chess League, Halesowen 1A and Malvern are at the head of the table, but Halesowen have a match in hand. The first of two fixtures between the leading teams was just before Christmas and ended in a decisive 5-1 away victory for Halesowen. So long as Halesowen are able to draw on the services of chess grand master Keith Arkell it is unlikely that the Halesowen 1A team will drop a match point during the season.

The teams in Division 2 are more equally matched. Stourbridge currently lead, but Kidderminster are snapping at their heels and have a match in hand.

The county chess teams play in the Midland Counties Chess Union and the under-140 team, skippered by Paul Sharratt, has been the most successful winning its opening matches. The first team lost its first two matches playing away and hopes to reverse its fortunes in the home match against Leicestershire in January. The under-120 team won its first match against Derbyshire, but lost the second against a strong Warwickshire team.