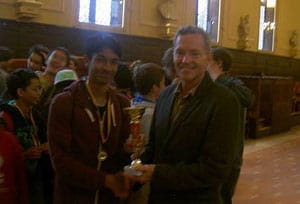 The inaugural ECF Secondary School Rapidplay Chess Tournament was a great success. 15 schools took part, some travelling over 2 hours each way, and fielded a total of 17 teams with 6 players in each team. There were lots of reserves so and 18th team was formed so that all teams played in all 6 rounds. A total of 112 players played 330 games of chess, which have all been rapidplay graded.

It cannot be said to have been a close contest for first place – a strong Haberdasher’s Askes first team won all 6 matches and scored a total of 30½ points. Two of their players, Ravi Haria and Roman Mitra, were the only players to win all their 6 games. In contrast second place was a 3 way tie between Wilson’s School 1st team, RGS Guildford and Winchester College, all of whom scored 22 games points.

The scoring system was based on games points (so every game counted towards the total) rather than match points. This proved popular with the weaker teams who found that their scores were increasing even when they were losing matches. Also the Swiss system lead to many close matches – almost half the results being 4 – 2 or closer, and 9 fixtures ended in 3 – 3 draws.

Feedback from schools who took part has been very positive, including:

“I just wanted to thank you for an excellent competition today. My boys thoroughly enjoyed the whole day and the whole experience generally. I’m in agreement with the other teachers that this kind of competition is much better for my school. Meeting lots of teams in one day is much better from an economies of scale perspective and it would certainly be appreciated in other competitions.”
“A belated thanks for Sunday! The boys really enjoyed it and are keen for the next event, we have a series of quick plays across our county during the year. These are all individual, but team events are so much better! ”
“Thank you again for organising what was a most enjoyable day of chess.”
“Many many thanks for organising such an excellent day. Our team really appreciated it.”
“Many thanks for a fantastic tournament; very well organised and a great venue”
“Thank you so much for yesterday’s event. My team (despite being relatively weak), had a great day and learnt a lot.” “This sort of event is great for us: Several graded games and meeting lots of schools and their chess teams and managers”

Most teams thought the time for each round (1 hour) was about right, though slightly longer should have been allowed for the whole event. Everyone preferred playing in one large section rather than being split into smaller all-play-all sections. Some schools would have preferred the scoring to be done by match points not game points. Most teams would like to play in a similar event within the next sixth months, preferring Sunday to Saturday (to avoid clashes with other school events). Many schools felt that they may be able to host a similar event in the future.
We are very grateful to Eton College for providing their facilities free of charge. One unique feature of the event was to hear the fantastic organ music at the end of their morning chapel service.