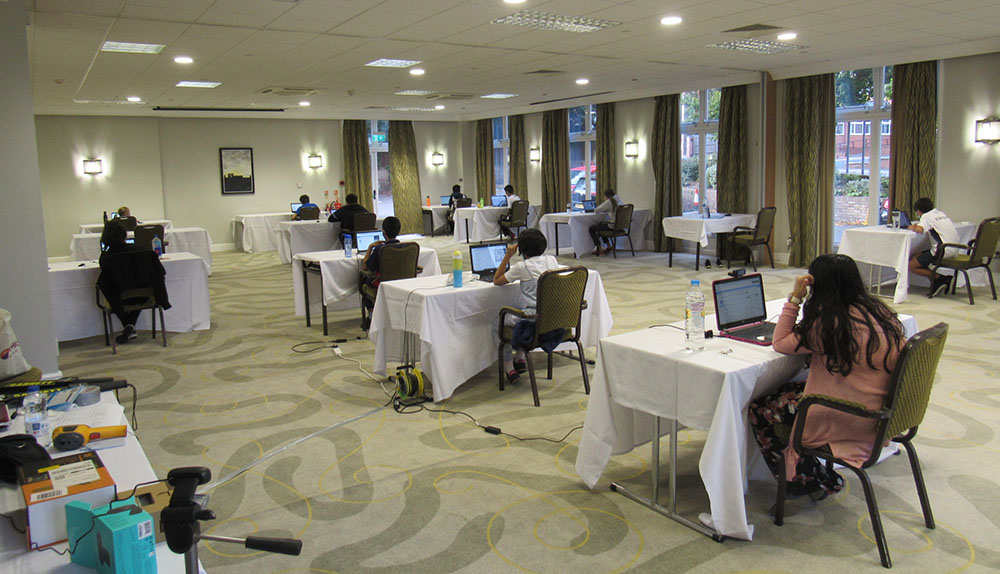 England’s Open and Girls teams took part creditably in the ground-breaking European Online Youth Chess Championships (EOYCC), held over the weekend of 18th-20th September, with a majority of players taking part from a central venue, Holiday Inn Kenilworth. It was the first major international individual and team tournament organised as a hybrid event, where play takes place online with a combination of in-person and video conference arbiter supervision.

Rapidplay tournament over 3 days
The sections were organised by the European Chess Union (ECU) as 9-round Swiss rapidplay tournaments, with a time control of 25 minutes plus 5 seconds per move, and included players from 40 countries. The eight sections included Open Under 18, Under 16, Under 14 and Under 12, and Girls Under 18, Under 16, Under 14 and Under 12. Russia triumphed in six out of the eight sections, winning the Open Under 18, 16 and 14, and Girls Under 18, 16 and 12. Azerbaijan won the individual title in the Open Under 12, and Belarus won the individual Girls Under 14.

To see the final crosstables of each section, please click on the links below. The England scores (out of 9) in the various age categories were —

A socially distanced playing venue
The event was played on the Tornelo.com playing platform, with online arbiter supervision via video conference and a local in-person arbiter at a central playing hub – in England’s case, at the Holiday Inn Kenilworth, near Coventry. A large majority of the 20 England players took part from the Kenilworth venue, socially distanced and staying within designated groups (or ‘bubbles’) of 6 throughout the three days of competition, following the new government regulations.

Each player played on their own laptop computer on a separate table, and sharing their screen by Zoom video conference link with the online arbiter. The playing hall was laid out in classroom style, with 16 players and one arbiter generously spaced out in a room measuring a total of 226 square metres. The local arbiter at Kenilworth, IA Matthew Carr, could observe the players in person and ensure that Fair Play regulations were strictly observed in the playing hall, and there were two digital cameras set up to observe the whole playing area from different angles. Partcipants wore face coverings at all times in the playing hall, and also throughout the public areas of the hotel, in compliance with government regulations.

A small minority of players, whose families were either shielding due to Covid-19 regulations or in a “local lockdown” area, were permitted by the ECU organisers to play from home – in one case, with IA David Sedgwick as local Fair Play arbiter at the player’s home, and for the other three players, there was increased Fair Play scrutiny from the ECU’s online arbiters.

Tornelo is slightly different from other major online chess servers (such as Chess.com, lichess.org, chessclub.com, and Chess24.com) in that it is specifically designed for organised tournaments run and controlled by qualified arbiters, rather than for fun or unofficial online events, and that it uses FIDE-approved pairings systems – not the ones designed by the servers themselves. The idea is to replicate as closely as possible an over-the-board (OTB) tournament, and it allows direct communcation between players and arbiters. It is true that Tornelo is a new and relatively untested playing platform, and that there were a few technical glitches during play, including some rounds starting later than advertised. But the England players adapted magnificently to these delays, staying focused at their computers, and once play started there were no issues. On the most important issues of avoiding internet disconnections and ensuring Fair Play, however, I believe the event was very successful.

An enjoyable experience
As well as the sterling efforts of IA Matthew Carr and IA David Sedgwick, particular thanks are also due to ECF Chief Executive Mike Truran and Director of Junior Chess and Education Alex Holowczak for their support in getting the event off the ground in such challenging circumstances, and to Guaranteed Events Ltd and the manager and staff of the Holiday Inn Kenilworth for providing us with an excellent venue. The players and their families all expressed satisfaction that the event had been a worthwhile experiment as a hybrid chess event, and were happy to be able to socialise in a limited way with other players and families whom they had not seen since over-the-board chess events were halted in the spring.

One informal highlight of the event for the juniors was the opportunity to play a fun online “Banter Blitz” tournament on Lichess.org on the Saturday evening. The players played, masked up, via their computers from their desks in the playing hall, and enjoyed a fair amount of light-hearted trash talking and chatter while the games were in progress.

On a personal note, I can say it was a real pleasure to be involved in organising this event and to interact with their players and their families, who all put in a lot of effort into the tournament and carefully followed social distancing. To the wider chess community, I can highly recommend the hybrid format as a way to play safely according to Covid-19 regulations, under arbiter and video conference supervision, while enabling players to meet in a socially distanced way and enjoy the experience of something close to an OTB tournament.