Round 9 was the final round of the tournament. Nadhmi traded pieces to an equal endgame with each having a Bishop, a Knight and 6 pawns. Ultimately it came down to Nadhmi’s superior pawn structure  enabling him to trade off the remaining pieces and queening. Denis played his longest ever game of over 6 hours and after a rollercoaster game, he settled for a draw. Max and Siena played well and won their games. The final scores for the England Players are as follows: Kavin Thooran 5/9 (U9 Boys), Nadhmi Auchi 5/9 (U11 Boys), Denis Dupuis 4.5/9 (U9 Boys), Siena Gurjar 4/9 (U9 Girls), Adam Hussein 4/9 (U13 Boys), Georgia Headlong 4/9 (U13 Girls), Max Miller 4/9 (U15 Boys) and Sohum Lohia 4/9 (U9 Boys). Well done to all for excellent scores against top players from across the globe! The day finished with water games and pedal-boating and to close the evening off, a blindfold simul by Coach Adam C Taylor.

Thanks on behalf of all the parents to our fantastic coaches, GM Glenn Flear, GM Johnathan Hawkins and FM Adam C Taylor and also to our Head of Delegation, Rejean Dupuis and all the staff at the ECF who supported the team so well both before and during the event.

Round 8 saw some good results for the England team – wins from Kavin, Sohum and Max and draws from Denis and Georgia. Kavin followed through his preparation well leading to victory. Sohum won quickly and Denis and Georgia fought long and hard leading to draws for them. Max played a great game resulting in another success for him – well done Max!

A successful day for the England Junior Team today – 5/8! Siena had a good game and fought off any untoward threats, leading to a victory. Georgia thought that she was claiming three-fold repetition the correct way but the arbiter didn’t agree – Georgia went on to win the game! Kavin played his longest game so far and went on to be successful. Coach Adam C Taylor was all smiles! Nadhmi and Adam played another great game against strong opposition leading to a couple more points for England!

An incredibly tough day for England – only another quick win for Kavin! Nonetheless each and every game was strongly fought and no one left the battle ground without a full and proper fight. The team are in good spirits and fully aware that they are playing some of the strongest players around the world. Keeping fingers crossed for tomorrow!

A day of drawing for the England Junior Team today! A quick win for Kavin followed by 4 draws from Denis, Georgia, Sohum and Nadhmi – against tough opposition! Sohum and Georgia’s game lasted near 3 hours while Nadhmi and Denis were in for 4 hours. Nadhmi had the chance to promote a passed pawn in the end game but so did his opponent leading to a draw with no mating options. Denis mostly outplayed his opponent and was up in material but a complicated end game ensued and eventually a draw was agreed. The evening was spent relaxing and playing games (not chess!) against delegations from across the globe.

Another tough day for the England Junior Team – some very long games from the whole contingent and some hard fought battles. Wins from Denis, Max and Adam and a draw from Nadhmi. The parents and coaches kept themselves occupied with magic tricks and card games – much to the envy of the other delegations! Fingers crossed for tomorrow!

Round 3 was a tough day for the England Junior Team. Nevertheless, each and every game was hard fought – most of the games lasted in excess of 3 hours. Wins for Sohum and Georgia today and a draw for Adam. Parents were completely banned from the playing hall today so no photos sadly – apart from, of course, our travelling magician David Miller who kept us parents and coaches occupied during the long wait for the players to finish. The evening finished with a team dinner at a local restaurant – it was unanimously agreed to stick to the tried and tested hotel buffet in future!

Before setting off today, Adam and Nadhmi had a training game using the large outdoor chess set! The team all left the hotel together providing each other with last minute encouragement.
The players left the playing hall in high spirits today after a great performance from all – with a team score of 5/8! Wins from Kavin, Denis, Sohum, Max and Nadhmi – well done to everyone for their efforts today.
As usual, the parents played rummy whilst waiting for the children – parents can be competitive too!

Morning coaching sessions took place with our team of coaches. All the players wore their England attire for the team meeting. Following the opening ceremony, the players, coaches and parents set off for the first round. Luckily, David Miller came well prepared with some playing cards and kept the parents entertained with magic tricks and card games.

The first player to come out was Denis Dupuis who won very quickly due to his opponent’s unorthodox antics failing against him. Well done Denis! Denis was closely followed by wins from Nadhmi Auchi and Adam Hussain. Siena Gurjar also won a long game, followed by a draw from Sohum Lohia. What seemed like hours later, Georgia Headlong finished her game with yet another win. What stamina Georgia – well done!

The England Team of 8 achieved 5 wins, 1 draw and 2 losses – excellent playing from everyone and a great start for England. Every single player went away feeling proud of their game and rightly so. The evening finished with an impromptu team dinner under the stars! 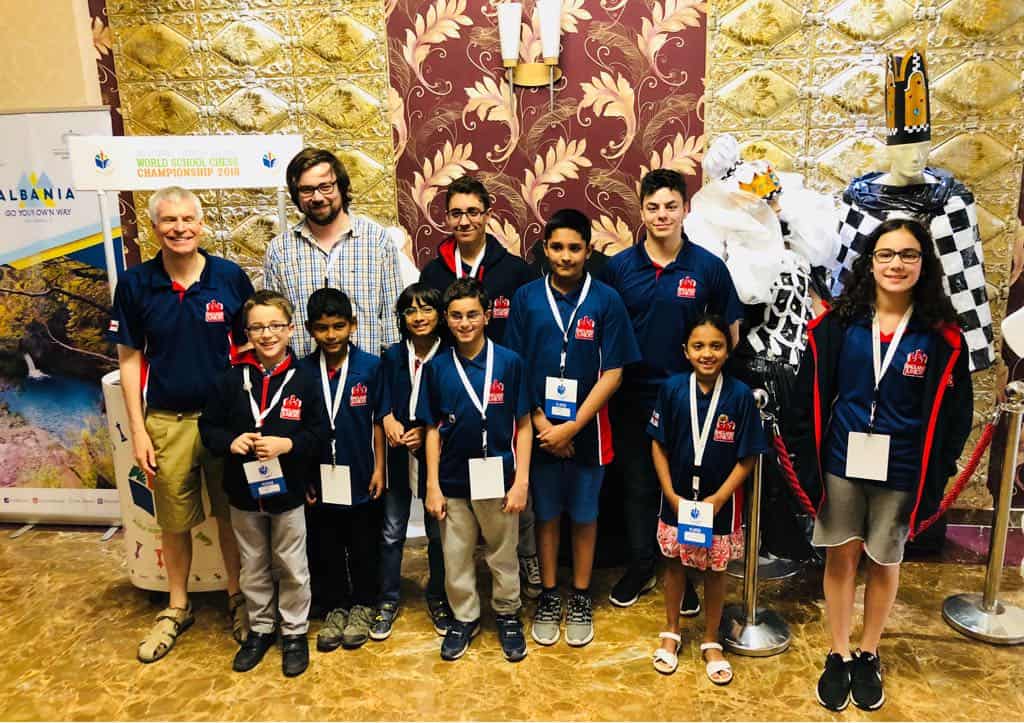 The England team in Albania

Our 8 strong England team together with 3 coaches have arrived safely in Durrës, Albania for the World School Chess Championship 2018. The team consists of Max Miller, Adam Hussein, Georgia Headlong, Denis Dupuis and Nadhmi Auchi (pictured below), Kavin Thooran, Siena Gurjar and Sohum Lohia. The next hurdle was the arrival of luggage – some of which had an extra unaccompanied journey in Vienna – but it finally arrived at 2.00am (phew)!

Our coaches GM Glenn Flear, GM Jonathan Hawkins and FM Adam Taylor presented the players with their official England shirts, hoodies and silver badges in time for the team photo! 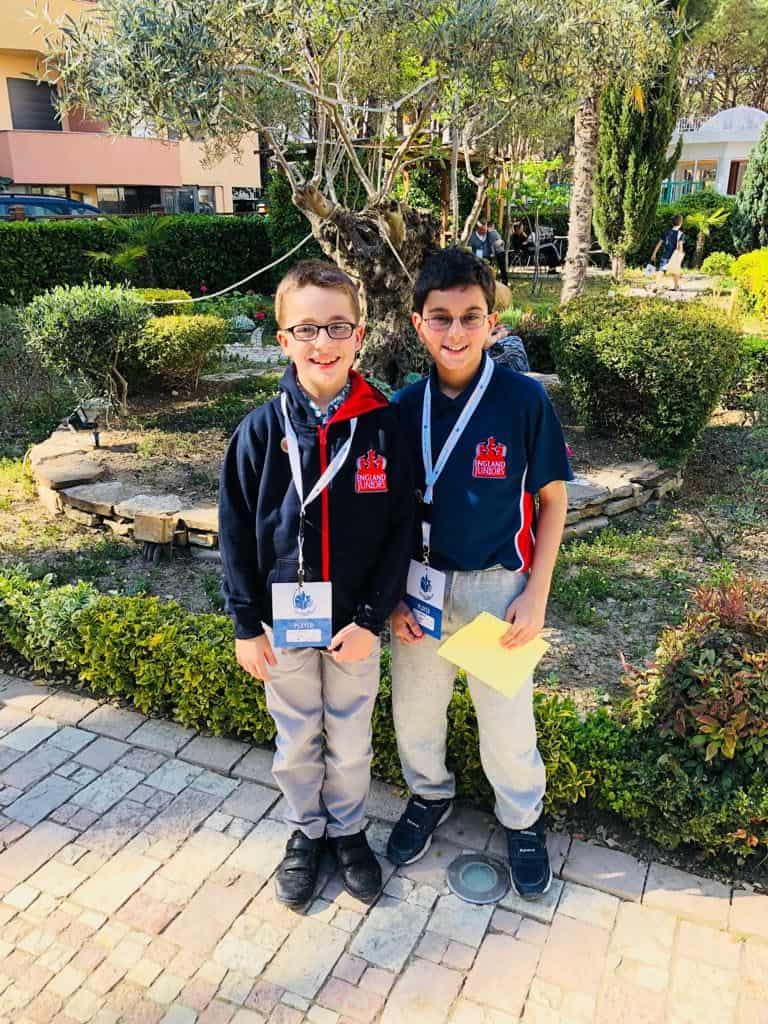