Congratulations to Kings College School, ECF National Champions at Under 11. Having been narrowly defeated in the 2018 final, Kings College have returned with a convincing victory in 2019.
The ECF National Schools Final (Under 11) was held over two days at Uppingham School. Ten schools had fought their way to the final through regional matches around the country. The final was played in an excellent spirit and with a high standard of chess. Congratulations to all the schools that participated. 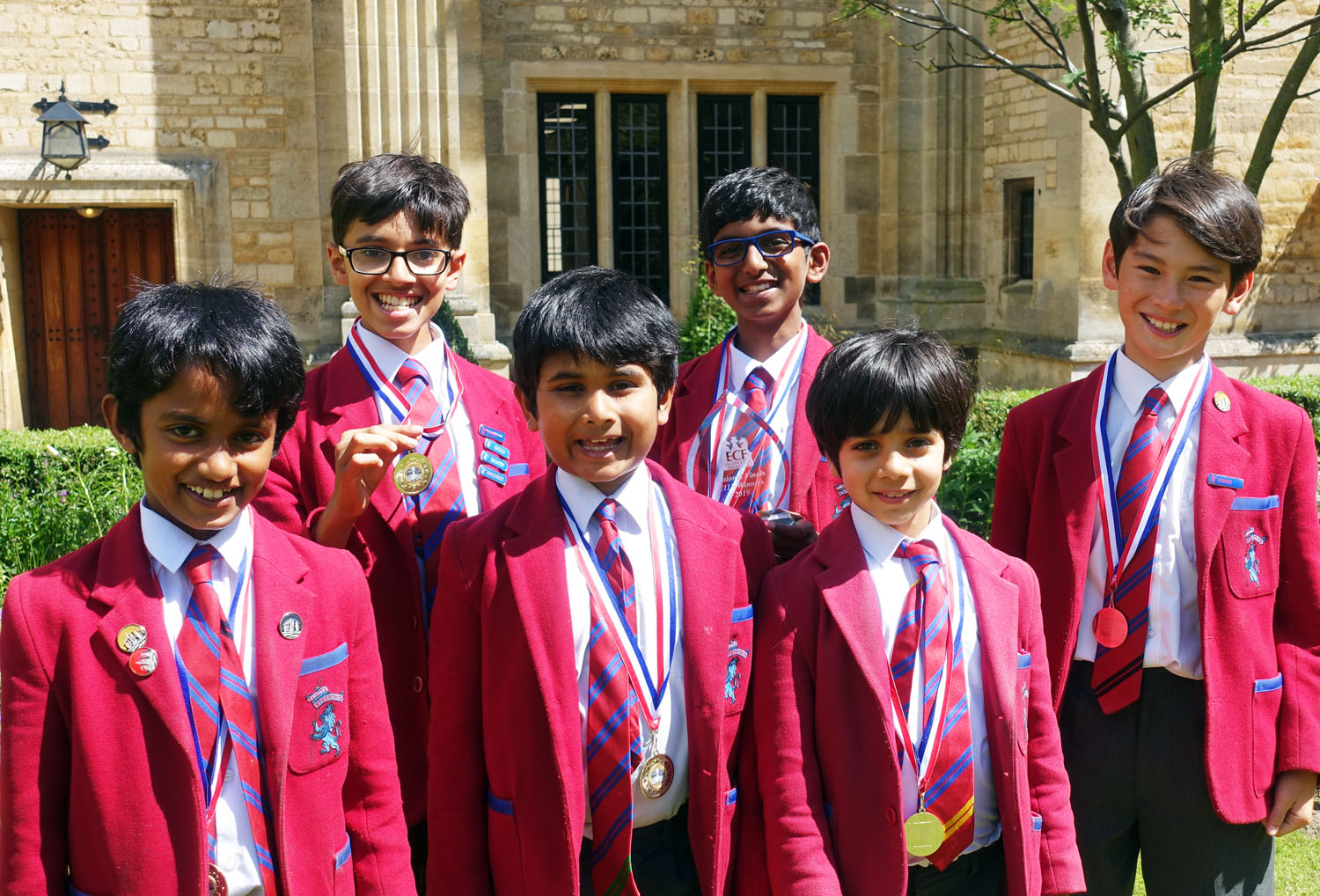 The Final will be held at Uppingham School, probably on the 4th / 5th July 2019. The National Final will be made up of all the winners from the regional zones plus the previous years winners …

1) The Championship is open to all schools in England, Scotland, Wales and Northern Ireland. Schools from outside these areas may enter at the Chief Controller’s discretion
2) Teams are of 6 players
3) A school may enter any number of teams. Teams will be designated A, B, C and so on. Where teams are not of equal strength the A team must be the strongest, the B team the second strongest, and so on. Children may not play for more than one team in the regional Zone Stage
4) Eligibility of players –

(a) Each player must be a bona fide pupil of the school he/she represents in the year of the competition; they will have been on the school roll at least one month prior to the event whether a regional final or the national final;
(b) Age limit: under 11 on the 1st September 2018; this limit is varied for Sottish schools where the determining date would be 1st January 2019;
(c) No player may represent more than one team in the course of a season, except as provided by (e) below;
(d) No player may represent more than one school in the course of a season;
(e) Where a school enters more than one team, then in the National Stage (but not the Zonal Stage) of the competition members of a lower (eg B) team may be promoted to a higher (eg A) team if their original team has been eliminated;
(f) Ineligible players will be penalised in accordance with Rule (h);
(g) Any claim of ineligibility, or other complaint, must be submitted by email within 48 hours to the appropriate Conductor. An appeal against a ruling by a Conductor may be made, within 48 hours, to the English Chess Federation’s Director of Junior Chess, whose decision will be final;
(h) If any player is found to be ineligible, their game will count as lost by default. Additionally, for each ineligible player in a team, one half penalty point will be deducted from the team’s score in that match.

ORGANISATION of the COMPETITION

5) The Championship will be organised in two stages: a one day Zonal stage, and a two day National Final for Zone Champions and runners-up. Dates for all these events are given in the Appendix.
6) The Zonal stage

I. The National Final will be made up of all the winners from the regional zones plus the previous years winners.
II. Sufficient second placed teams will then be invited to make the total number of finalists up to an even number. Those teams will be selected on the following basis:

a. Any regional event with significantly more schools taking part, this at the discretion of the Controller.
b. The second placed teams closest in point count to their zone winners.

III. In the event of winning teams unable to attend the final, the Chief Controller may select further teams on the above basis.
IV. The event will be organised as a Swiss Team Tournament.
V. Winners will be decided by highest game points scored. In the event of equal scores the championship will be tied.
VI. The final will be played with time controls of 50 minutes plus a ten second increment for all moves.
VII. Teams will present their team two days prior to the final. Board order will be by grade strength or best estimate. Board order may not be varied except after consultation with the controller. Defaults will be on the bottom boards.
VIII.  The National Final will be played over two days (July 2019) at Uppingham School. Qualifying schools will be sent details.

8) Any claim of ineligibility, or other complaint, must be submitted within 48 hours to the Controller, by first-class post or faster method. An appeal against a ruling by the Chief Controller may be made (within 24 hours) to the English Chess Federation’s Director of Junior Chess, whose decision will be final.
9) Any question arising which is not provided for by Rules 1-24 will be referred to the Chief Controller. An appeal against his/her ruling may be made (within 48 hours) to the ECF National School’s Control Team.
10) The FIDE Laws of Chess (July 2017) which regulate the normal game of chess and the E.C.F. Tournament Rules apply except where specifically modified below.
11) Spectators must never interfere. Normally the Arbiter will not intervene, unless invited to do so by one of the two players involved in a game. The Arbiter, however, may point out a flag fall.
12) The Arbiter will decide where the clock is to be placed.
13) In the Final Players are obliged to record their moves. Where a game is being recorded, the Arbiter must have full view of the scoresheet.
14) An illegal move suffers the normal penalties of the touch-move rule. Such a move is completed once the opponent’s clock has been started. If either player has less than five minutes left on the clock and an illegal move is made, the Arbiter will award the opponent two minutes for the first offence, and two minutes for a second offence. A further offence will lead to the loss of the game.
15). Where analogue clocks are being used a player may claim a draw during the last two minutes on his clock and before his own flag falls. He should offer a draw to his opponent. If it is refused, he must stop the clocks and summon the Arbiter. The Arbiter may then, or subsequently, declare the game drawn if he is satisfied that the opponent is making no effort to win the game by normal means. Where incremental time controls are used this rule ceases to apply.

Guidance for Players who are short of time

1. If you play for a win, you risk losing, unless your opponent has a bare king.
2. If you are holding a position so that your opponent cannot make progress, offer him a draw. If he rejects the offer, summon the Arbiter.
3. If you wish to claim that your opponent is not making progress, do so immediately you have only two minutes left. Any later and the Arbiter may not be able to observe enough moves to make a decision.
4. Where the final uses incremental time control the above does not apply.

1. Rule 21 ‘cannot possibly checkmate’ is defined as there being no mating possibility even with the help of the opponent.
2. Rule 23 is the only rule which requires some chess judgement from the Arbiter. In positions such as where a player has a bare king blocking the opponent’s sole rook’s pawn, the Arbiter may declare the game drawn if he believes the defending player is of adequate playing strength.
3. The Arbiter is not expected to adjudicate a position, but they should make themselves aware of the circumstances, usually by watching a few moves. For example, if a player:

4) The player who is short of time should make sufficient moves in his/her remaining time to allow you to judge the merits of the claim.
5) The result of games which have been cleared away should not be decided upon unless you are satisfied that the players observed the correct procedure for reporting the results, and that there is an intelligible record of the game available. Otherwise the declared result should stand.