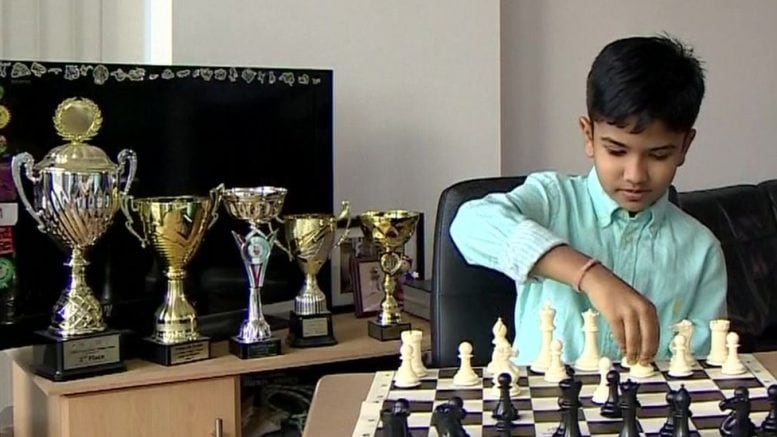 England junior chess player Shreyas Royal has capped a terrific season across the board with the news that his father Jitendra Singh’s Tier 2 Work Visa has been extended. Nine-year-old Shreyas has lived in the UK since he was three, but Jitendra Singh and his wife Anju were originally informed they would be sent back to India when Jitendra Singh’s current work visa expires in September. The ECF stressed to the Home Office that Shreyas’s special talent at chess should enable the family to remain the UK and this status has now been confirmed.

Following last year’s remarkable performance in the World Under 8 championships in Brazil where Shreyas finished fourth, his excellent form has continued and his international FIDE (chess governing body) grading is 2115 putting him second in the world ranking for his age. He also excelled in the recent Major Open at the recent British Championships in Hull where he scored 5.5/9.

In a joint letter to Home Secretary Sajid Javid, Leeds West MP Rachel Reeves and Greenwich and Woolwich MP Matthew Pennycook backed the family’s request to stay in the UK pointing out that “the UK should always encourage the world’s brightest, most talented people to work and make their lives here. Shreyas is recognised by the English Chess Federation as the country’s greatest chess prospect in a generation.”

Jitendra Singh told The Guardian, “We are very happy. Shreyas jumped up on the sofa when he heard the news. I want to thank all those who helped and supported us. I would also like to thank the Home Office and the Home Secretary who considered our case.”

Traci Whitfield, Director of Junior Chess, ECF was quoted as saying, “I am delighted that Shreyas’ family has been given an extension to their visa. It is excellent news for junior chess in the country as Shreyas is an excellent young player with huge potential and prospects for the future. He is a popular, active member of both the junior and adult chess scene and his continued participation is much valued by everyone.”

Malcolm Pein, ECF Director of International Chess, said, “Wonderful news for the family and thanks to all our supporters in the political arena and in the media who helped make this happen. Chess in Schools and Communities and the ECF have worked tirelessly in tandem on this campaign. Shreyas can continue to represent England and I look forward to more successes and watching him become one of our top players. The decision of the Home Secretary recognises that chess and chess players are an asset to this country which makes the outcome doubly pleasing.”

Mike Truran, ECF Chief Executive, remarked, “This is really excellent news for English chess in general, and for Shreyas and his family in particular. We are all delighted that one of our best prospects ever for top chess honours will be able to remain in, and continue to represent, this country. Our thanks go to the Home Office and everyone else involved for their help in making this happen.”

Return of OTB chess in Sheffield