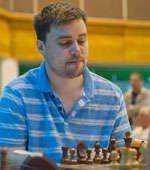 Internship at Chess in Schools & Communities