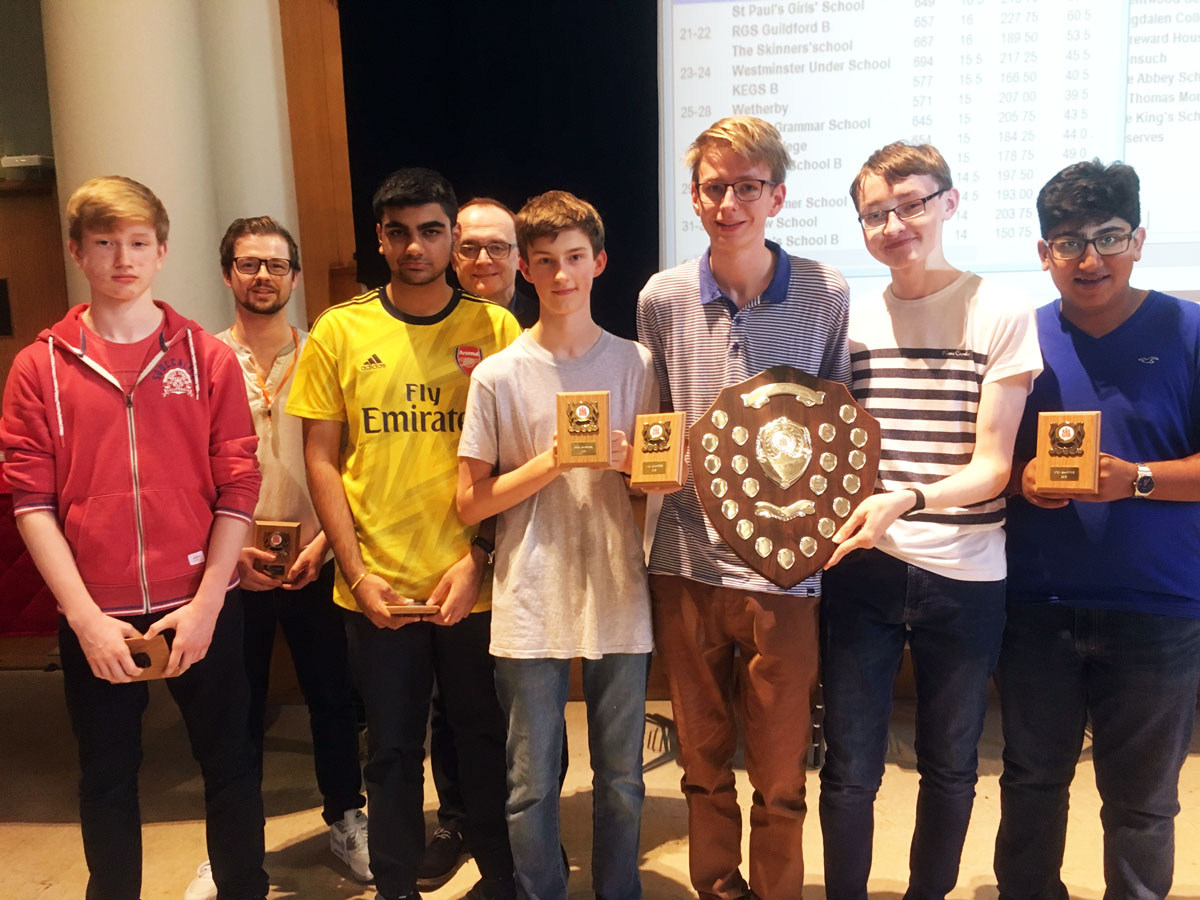 We are very grateful to Stephen Woodhouse, ECF Non-Executive Director, for presenting the prizes …

On a lazy, balmy mid-September afternoon in the time-hallowed portals of Eton College (founded on September 12th, 1440), there was to be found frenetic and determined chess and bashing of digital clocks. It had all come down to the last of five rounds – Gonzaga College (Ranelagh, Dublin) had led from the front, and after four rounds, the title seemed theirs, with a surely unsurpassable 22 pts from 24 games. But their closest rivals, Guildford College (20½ pts), last years’ winners, had to play them in the fifth and last round … .and other teams – Hampton (20pts), Haberdasher’s Aske (18½ pts) and Brighton College (18½ pts) – were also snapping at their Kings.

The day had started with a certain amount of happy confusion as fifty-three teams (six players per team, and reserves, parents and chess coaches) descended on Eton College, having navigated their way through narrow streets and past obstructive street signs. Playing the chess had to be easier than driving there. Under the direction of Neill Cooper and Eton’s Head of Chess, Justin Moston, and the team of arbiters (huge thanks to all of them for all their hard work!), all were soon settled and ready to begin. A countdown to the first move befitted the mood. No time for mental meanderings here – this was 20 minute and 5 second incremental rapid play chess (the modern format of what used to be thirty-minute games), and every move and minute might prove vital.

As the early rounds passed by, the teams began to separate in score, a small group of seven or eight keeping at the top of the leader board. But all the teams fought hard to acquit themselves well, players needing to impress their team mates, team coaches and themselves, whether at the top, the middle or the bottom of the pile. An eleven-year old might find himself or herself playing an eighteen-year old; age was no barrier, the hurdles only the correct movements of pieces on the board and the inexorable passing of time on digital clocks.

And so to that last round – the top two matches were played on the stage, and never had so many onlookers surrounded those last unfinished games. Junior chess stars faced each other down, the detritus of smashed defences around each board. Gonzaga College lost 1½-4½ to a jubilant RGS Guildford; Haberdashers went down by the same score to Hampton. Thus it was RGS Guildford who could hold up the new shield (and large and weighty it was) with 25pts; Hampton did just enough to ‘leapfrog’ Gonzaga with 24½pts, and Gonzaga College (winners at last year’s Millfield International) took third spot with 23.5pts. What thrills; what nerves were needed.

Which is where this year’s story ends; we can but encourage other and new schools to try this tournament for secondary school players – it is tremendous fun – more than one player was heard to describe it as ‘the best tournament we have all year!’