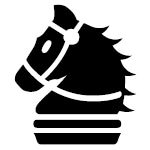 18-year old Southampton University student Michael Fernandez is the new county champion and holder of the Silver Rook. Michael finished 1 point behind the joint winners of the Open Section, Mike Waddington and Peter Anderson, but he was the highest-placed qualified Hampshire player, beating Matt Chapman on tie-break. Phil Stimpson won the Under-175 grading prize.

In the Major Section, Geoffrey Brown swept away the opposition to win with a magnificent score of 6/6. Lukasz Piecha was in clear 2nd place with 4½,  but there was a 6-way tie for 3rd place on 3½ pts. John Carter finished with 4 points, and wisely chose the Grading prize, which was better value than a 6th share of 3rd prize.

The Minor Section was almost a repeat of last year, in that 1st place was share by four players with 4½ pts – but they were a completely different four – Chris Priest, John Belinger, Ivor Kelly and Steven Kitley. Chris Priest won the Hampshire title and trophy on tie-break. David Jerome won the Under-100 Grading prize with 3½ pts.

The Ladies prize found four ladies vying for the prize this year – a record for us, but still scope for improvement. Amanda Jones, Maha Chandar, Mansa Chandar and Gillian Moore all had 3 points, and have agreed to share the trophy between them.

Here are the full results —

The John Dunleavy Memorial Prize for the best game in any section will be announced later, on the Hampshire website at www.HampshireChess.co.uk