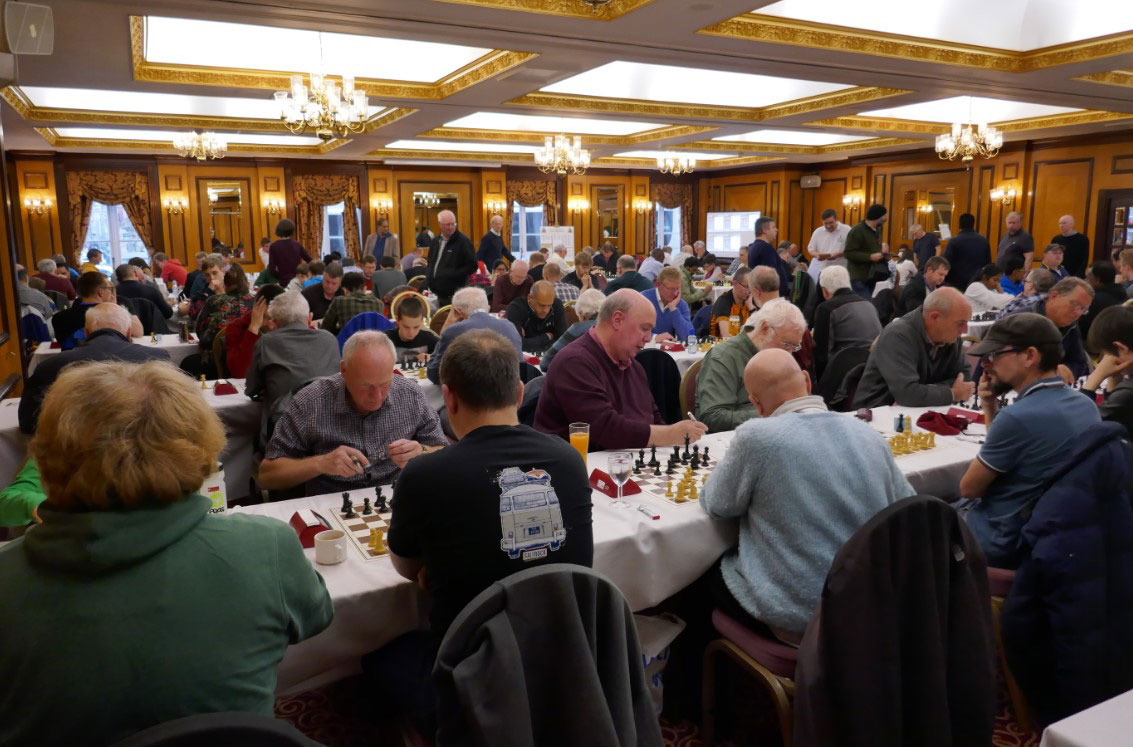 1st-3rd November saw almost 160 players meet in Hull at the ideally located and smart Royal Hotel (also the venue for the recent English Women’s Chess championship and the rapid play at the 2018 British Championships) to compete in the Hull 4NCL International Congress.  This was a unique partnership for both 4NCL and HDCA and included a 10 player all play all GM norm event, spread over five days (starting on 30th October) with the last four rounds played in the same hall as the weekend congress. In total the whole event saw 18 titled players (including five GM’s) from 11 different FIDE Federations with 23 players graded over 2150.

The GM norm event was spearheaded by GM’s Vojtech Plat (Czech Republic), Laszlo Gonda (Hungary) and Matthew Turner (Scotland). While only one GM norm was obtained – by an existing GM Vojtech Plat (who won the event with 6.5/9) – the one FM in the field, Marcus Harvey, obtained an IM norm with 4.5/9 by drawing with GM Matthew Turner in the final round. Games were projected live at the venue for spectators as well as on chess24.com and via the 4NCL web site. The full cross table for the event is below and may also be found, together with all the games and pgn files can be found at www.4ncl.co.uk/fide/information_gmnorm_event_hull_2019.htm and at http://chess-results.com/tnr477622.aspx?lan=1&art=2&flag=30

The weekend congress, with £3,300 in prize money, saw 39 players enter the open event (played on live boards and covered on chess24.com) with GM Daniel Gormally (Alnwick) winning first prize, second being shared between Samuel Milson (Sheffield Nomads), John Richardson (Hendon) and Jonah Willow (West Nottingham) all on 4/5. Peter Wood (Lewisham) and John Thackray (St Andrews, Hull) both on 4.5/5 shared first prize with three players tied on 4/5 for second in the U2000 event which had 50 competitors; Neal Fisher (Peterborough) headed the 59 entries in the U135 event with 4.5/5 and five players tied for second with 4/5. A full list of all the prize winners can be found at www.4ncl.co.uk/fide/prizewinners_hull_2019.htm and on the chess-results.com link above

The four strong arbiter team was headed by Alex McFarlane and a team of local qualified arbiters, led by Douglas Vleeshhouwer who was awarded his third level FIDE arbiter norm at the end of the congress.

Immediately before the weekend congress there were three days coaching for juniors led by FM Charlie Storey. This was able to use live games from the actual congress as a part of the coaching. HDCA and 4NCL wish to acknowledge the generous support of the John Robinson Youth Chess Trust which enabled this coaching to take place. They also provided additional junior prizes and free places for juniors at the weekend congress.

The congress mugs were quickly snapped up and there were HDCA and 4NCL logo decorated congress pens, scoresheets and board numbers. The congress cake (raspberry) competition was won by Gary Clarke (Gosforth) who correctly guessed black’s move 18 of Byrne v Fisher, New York 1956. Cakes decorated with positions from Tal v Hjartarson: Reykjavik: 1987 (chocolate) and the final position from Anderson v Dufresne: Berlin 1852 (carrot) were freely devoured alongside the provided tea and coffee.

Apart from their own input, 4NCL and HDCA would like to acknowledge financial support from the following, without whom this event could not have taken place: Hull Culture and Leisure, Friends of Chess and the ECF.

The venue proved excellent with all players being accommodated in the chandelier lit Royal Suite with the bookstall and analysis room nearby in the Prince of Wales room. Discussions are already taking place concerning a repeat, and hopefully larger, event, in 2020.