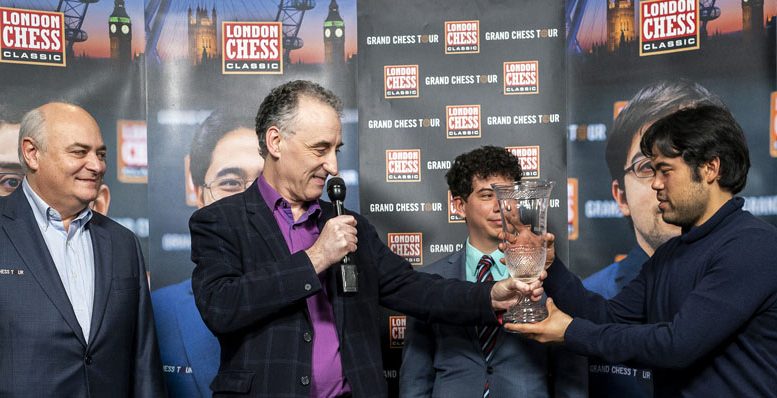 This year’s 10th London Chess Classic (December 9th – 17th) sees World Championship challenger Fabiano Caruana battle it out in an exciting new Knockout format with Hikaru Nakamura, Levon Aronian and Maxime Vachier-Lagrave for the LCC and Grand Chess Tour title. With a mix of classical, rapidplay and blitz, there’s a healthy pot at stake of $300,000 (and $120,000 to the winner).
Accompanying the Classic this year is an expanded British Knockout Championship with a £50,000 prize fund and a stellar field led by members of England’s successful Olympiad team – Mickey Adams, David Howell, Luke McShane and Gawain Jones. For the first time, the event also includes places for England’s top two women players, Jovanka Houska and Harriet Hunt. In total, 12 of the country’s top players will be fighting for a place on the Classic auditorium stage to determine the winner. Like last year, the event will be staged at Google HQ and Olympia.
Also at Google HQ on December 10 will be the prestigious Pro-Biz Cup charity fundraiser, featuring Caruana, the legendary world champion Garry Kasparov, artificial intelligence guru & DeepMind CEO Demis Hassabis & leading English junior Shreyas Royal.
The accompanying chess festival will again provide plenty of spills and thrills for hundreds of professional and amateur players at all levels, from the FIDE Open to various weekday and weekend tournaments. Most events are sold out, but spectator tickets are still on sale.
More here – www.londonchessclassic.com – and here – https://tickets.londonchessclassic.com/spectators.php
[picture of Gawain Jones by Lennart Ootes]

Manifesto – The Year of the Woman in Chess