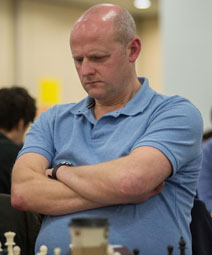 Neil died on Monday 25 May in Jersey at the age of 47. He was on holiday in Jersey with his wife and four children. He took his dog for a walk and was found dead of a heart attack. He was very fit and there was no warning of any problems.

Neil was a FIDE Master, his last rating being 2277. He was very, very active as a child. Possibly he could be regarded as a child prodigy. Because of his great interest in chess, the whole family chipped in. Thus his father Les, mother Mich, brother Trevor and sister Susan were all fixtures to be seen at chess events. They added greatly to our chess family in that period. The London Central YMCA was a major centre of activity at that time and members of the family had various administrative posts in the chess club.

I remember Neil asking me about how the Seeded Swiss System worked when he was about 11. It wasn’t universal at that time. I laid out the pairings cards on a table and asked him how he would do the pairings. Of course he had no problems. I remember our being partners at bridge when he was still very young. He also did well at poker, but we never played against each other. He was also a cricket enthusiast.  Andrew Martin describes his chess as energetic, imaginative and tactically astute. But it was the sheer pleasantness, good manners and social grace that stand out about Neil.
[picture by John Upham]

He won the British U11 Championship in 1978 and the Under 16 1981. He played for England on board 1 in the Glorney Cup in 1986 – above Michael Adams. He was British Lightning (10 seconds a move) Champion in 1984 and 1991. Throughout his life he lived in and played for Essex. He was also a mainstay of Writtle Chess Club. But he virtually gave up playing internationally in 1989. He concentrated first on academic work and later on the money markets. The 100th British Chess Championships in Torquay 2013 rekindled his interest temporarily. He scored 7/11 there; took part in the British Rapidplay  and scored 5.5/9 in the London Chess Classic Open all in the same year. They were the only internationally rated games he played this century.

The games of a chessplayer are part of their legacy. Look at the British Chess Magazine June Game of the Month – https://www.youtube.com/watch?v=acG1kWkIUOY&list=UUKQ_j0fm3NioMRE3i-1CryA … Andrew Martin analyses his loss with the white pieces to Neil in the 1986 British Championship. Another game, supplied to me by Bob Kane can be found on –
http://www.chessgames.com/perl/chessgame?gid=1068401. This is where he beat Anatoly Karpov in a simultaneous display (Tolya was giving the display). He also drew with Garry Kasparov in another display. 5 English youngsters were at the London Docklands in 1984. 5 American youngsters and Garry in New York. One has to be careful about the facts. Bob also supplied me with a press cutting of Neil playing against another World Champion, Tigran Petrosian. Carr had won. But that was Trevor Carr, although the photo shows both of them.

When this was written, Neil’s body was just being repatriated to England. We don’t have details of the funeral yet. Our condolences to his wife Shelley, his children, and the family who we knew so well. Everybody in the chess world who met him, gained something from the experience and has now lost something.