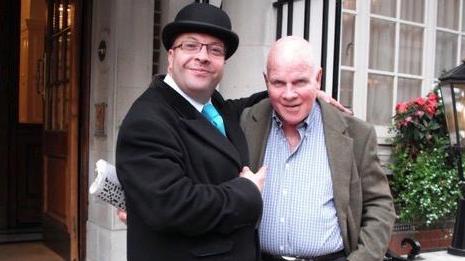 Nicholas Grant, right, with a doorman at the Goring Hotel, London, where he lunched

26 March 1931 to 4 November 2018 – Nicholas (Nick) Grant, Founder Chairman of Duncan Lawrie the boutique London Private Bank, was the prime mover in sponsoring the English Chess Teams between 1978 and 2001 when he retired.

The mid 1970’s saw the start of the English Chess Explosion with Tony Miles becoming our first Grandmaster in 1976. In those days the Team was not sponsored and played without fees. Olympiads lasted for nearly a month. This was not a tenable situation for the growing cadre of budding chess professionals. The issue came to a head when Tony Miles declined an invitation to play in the 1977 European Team Final in Moscow. I was greeted on arrival there by Victor Baturinsky, the Head of Soviet Chess, with his opening shot, “Where is Miles?” to which I replied somewhat incautiously, “Unlike you I do not control my players passports”. This provoked Harry Golombek to write a piece in the Times appealing for a sponsor for the Team and Duncan Lawrie stepped forward with an offer so to do.

During the years when I was Non-Playing Team Captain of the Open Team I got to know Nick and his colleagues at Duncan Lawrie very well. Theirs was more than a traditional commercial sponsorship – the level of interest and support was exceptional. They created the tradition of the send off party to the Team Events at their Offices at Hobart Place, to which the great and the good and some of the not so good were always invited, and the Teams would all arrive with our suitcases and depart thence direct to Heathrow. More often than not, if we did well, Nick would be there at Heathrow to welcome us back. During the seven Olympiads that I captained during their sponsorship we gained three silver and one bronze medal.

Duncan Lawrie’s support was not however limited to the Team Events. In 1986 they supported the holding of the first leg of the 1986 World Championship between Karpov and Kasparov in London by hosting the opening party for the event with Margaret Thatcher as the guest of honour. In 1988 they sponsored The Duncan Lawrie World Mixed Challenge in Victoria – won by the 12 year old Judit Polgar ahead of her sister Sophie, two GM’s, an IM and four members of the English Women’s Team. In 1991 they sponsored the English Knockout Championship at St Paul’s School after the European Team Championship was cancelled. The event attracted all our leading players and was won by Nigel Short who beat Mickey Adams in the final.

Nick was a man of many interests. He was known as “banker to the literary set” and Duncan Lawrie supported the Arvon Foundation and its International Poetry Competition. It was through this connection that I was introduced to Ted Hughes! I have many fond memories of Nick including one evening at his flat of poetry reading.

Nick’s contribution to English Chess was immense. The Sponsorship of the English Teams was a key building block in the International successes of our Players. He was always ready to offer advice and insight into our affairs and on a number of occasions hosted lunches to assist our cause. He was a true friend to the Federation, its Officers and Leading Players and will be sorely missed.

New season, but the Oldest Challenge