341 players from across the United Kingdom and beyond entered qualifying for the new UK Open Blitz Championship. To qualify for the Finals on 1st December, players had to finish in the top two places in a qualifier. In addition, the top two female players qualify for a Women’s Final being played at the same time. Each qualifier was a gruelling 15-round tournament, played at a time limit of all moves in three minutes, plus two seconds increment per move.

Belfast
Kamil Marchlewicz won the Belfast qualifier with 13 points. Michael Waters was half a point behind on 12½. Marchlewicz beat Waters with black in Round 4 on his way to an 8/8 start. It was Waters’ only defeat in the tournament, and it ultimately proved to be the decisive factor in Marchlewicz’s victory. Both players qualify for the Final. Ross Harris and Richard Gould should be congratulated on running a successful event, which was the first FIDE-rated Blitz tournament ever held in Northern Ireland. 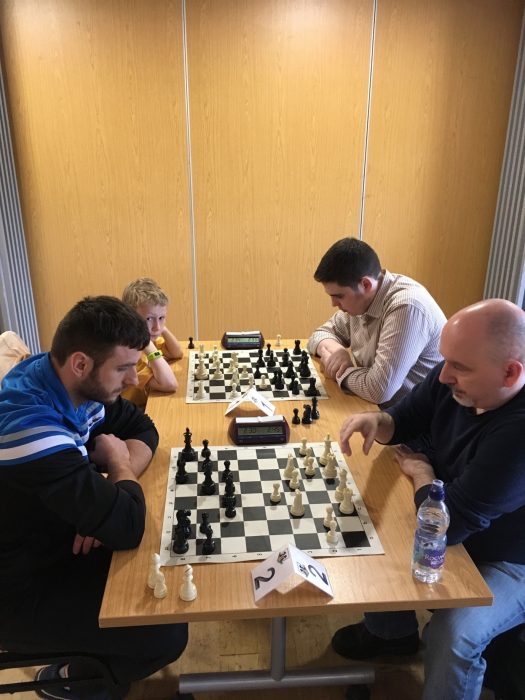 Birmingham
Three-time British Champion and England international, GM David Howell, won the Birmingham qualifier with a perfect 15/15. The field of players also contained two IMs and two FMs, as well as several top players from the Birmingham League. The two IMs finished 2nd and 3rd, with Lawrence Cooper on 12 points narrowly edging out Ameet Ghasi on 11½ to qualify. Cooper won their Round 6 encounter to gain the advantage over Ghasi, who fought back through the rest of the tournament. His charge was halted in Round 13 with a loss to Tony Hynes. At that point, Cooper led Ghasi by 1½ points and halved out to ensure qualification. At 48, Cooper is the oldest qualifier for either of the Finals. Qualification for the Women’s Final was keenly contested, but in the end, Samia and Shyema Sheikh qualified for the Women’s Final with 7½ points. They narrowly edged out Sylvia Chidi and Kate Walker, who both finished on 7. My thanks go to International Arbiter Matthew Carr and Hok Chiu, who ran the event very smoothly and successfully on the day. 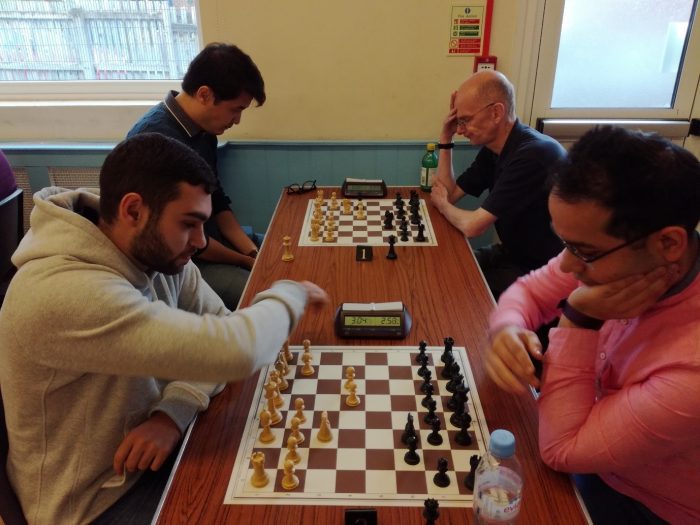 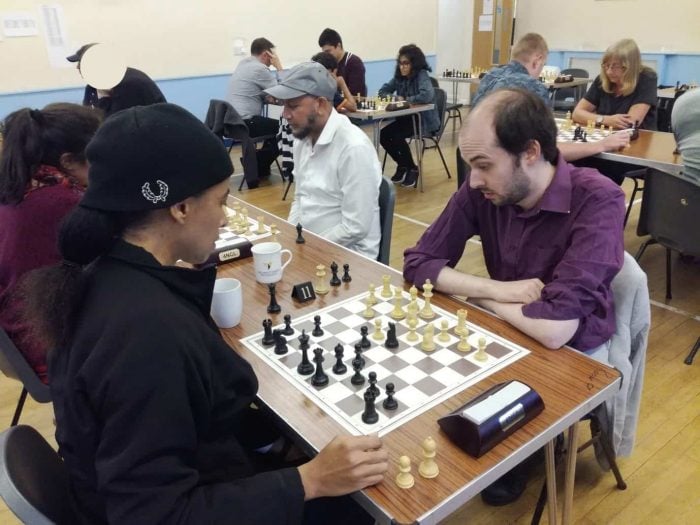 Bristol
GM Nick Pert was selected to represent England in the Olympiad in Batumi, Georgia at the end of this month. He warmed up for that by winning the Bristol qualifier with 14½ points. The rest of the field was very evenly matched, and included 85-year old IM James Sherwin. The 2nd qualifier was Krystof Sneiberg, who won his last 8 games to finish on 12½. He finished ahead of Steven Jones on 12, winning their game in Round 4. The two qualifiers for the Women’s Final were WIM Fiona Steil-Antoni on 8½ and Alice Lampard on 7. Erika Orsagova was tied with Lampard, but missed out on qualification on tie-break. My thanks go to FIDE Arbiter Thomas Thorpe, who stepped in to run the event, along with FIDE Arbiter Geoff Gammon. 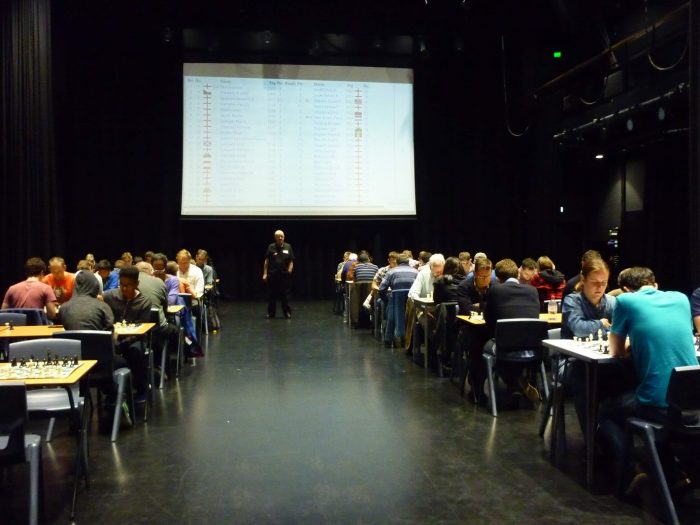 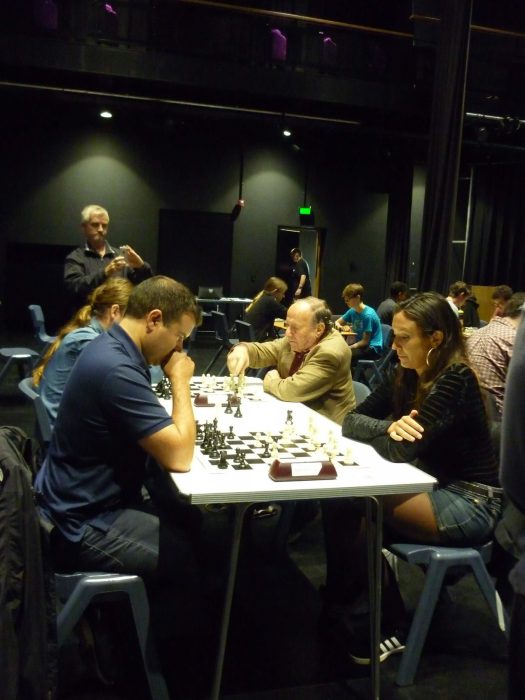 Round 3 – nearest to the camera – Fiona Steil-Antoni v Nick Pert. Nick won on his way to qualifying for the Open Final, and Fiona qualified for the Women’s Final. John Stubbs (back of shot) had the arbiter’s permission to take a photograph on his mobile phone! | Photo by Anita Thorpe

Cardiff
The Cardiff qualifier was full of players who will represent Wales in the upcoming Olympiad, but it was two non-Welsh registered FMs, Marcus Harvey and Grzegorz Toczek qualified from the Cardiff qualifier. Harvey won the qualifier with 14½ points. Toczek tied with Alex Bullen on 11½, but Toczek finished ahead by virtue of beating Bullen in their game in Round 5. While the Cardiff qualifier yielded no Welsh qualifiers for the Open Final, Madeleine Smith qualified for the Women’s Final, scoring 8 points. My thanks go to International Organiser and Arbiter Kevin Staveley for organising and arbiting this tournament. 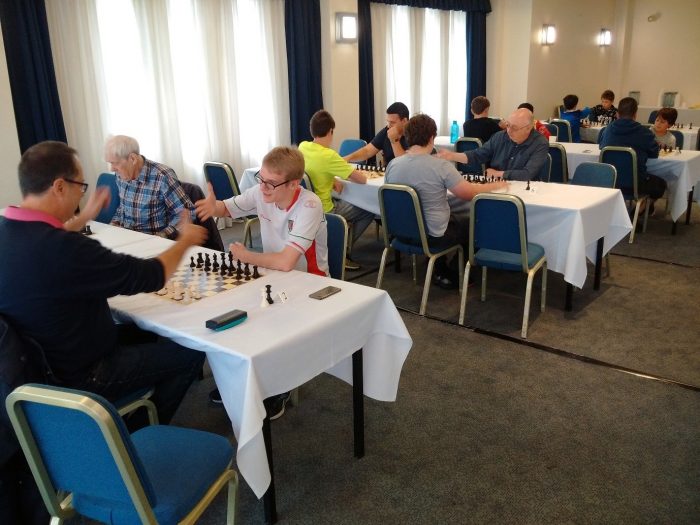 The start of Round 11 – nearest to the camera Tim Kett v Alex Bullen. Neither player qualified for the Final, but both will represent Wales in the Olympiad | Photo by Richard Stevenson

Edinburgh
Andrew Green won the Edinburgh qualifier with 14 points, his only loss was to David Escofet Martin. The race for qualification in 2nd place was close between Martin, Svetlana Sucikova and Daniel Abrahams. Sucikova prevailed on 10½ points, becoming the only female player to qualify for the Open Final. As the leading female player, she has the right to choose which of the two Finals she wants to play in. If she chooses to play in the Women’s Final, then her place in the Open Final will go to 3rd place Escofet, who tied with Abrahams on 10 points, but won their game in Round 10. The other qualifier for the Women’s Final was Suzy Cooke, who scored 9 points. Cooke was herself in 2nd place overall after 13 rounds, but finished the tournament with two losses to Abrahams and Nigel Chapman. My thanks go to David Clayton for finding the venue for the tournament, and International Arbiter Alex McFarlane for running it on the day.

London
London was by far the biggest qualifier. Among the 123 players who played were 20 titled players, including GM Stephen Gordon, 6 IMs, and 9 FMs/WFMs. Reflecting the multi-cultural nature of London, 23 different Federations were represented. IM Thomas Rendle won with 13 points, and was unbeaten throughout the tournament. He finished ahead of David Haydon on 12½, who also qualified for the Open Final. IM Sophie Millet, who will play for the French Women’s team at the Olympiad, was the highest-scoring female player on 10½ to qualify for the Women’s Final. Madara Orlovska also qualified for the Women’s Final on 10 points. In addition to them, due to there being vacancies in the Women’s Final after qualification places were unfilled at other qualifiers, Yuting Fu and Naomi Wei qualify for the Women’s Final on 9 points, along with WFM Sarah Longson on 8½. My thanks go to organiser Kishan Pattni and International Arbiters Adam Raoof and Alan Atkinson. A special thanks goes to Rob Willmoth and James Corrigan on behalf of Chess & Bridge, both of whom supplied clocks at short notice.

Round 9 – Ezra Kirk v Tom Rendle. Rendle went on to win the qualifier.
Photo – a screenshot of a video by Adam Raoof, available to view on his Twitch account

Manchester
FM Joseph McPhillips scored 13½ points to win the Manchester qualifier, losing only in the Final round with his tournament victory already assured. IM Gediminas Sarakauskas was the number 1 seed on rating, but arrived only in time for Round 3 after a confusion about the start time of the event. This meant that he spent the rest of the tournament having to catch up. Alan Walton was on 7/8 before losing to Sarakauskas in Round 9, which reduced his lead over Sarakauskas from 1½ to ½. A few rounds later, after Walton lost to Thomas Carroll in Round 12, Sarakauskas beat Robert Starley to draw level on 9/12. Sarakauskas was ahead on tie-break at this point, by virtue of his victory over Walton in Round 9. After a further loss for Walton in Round 14, Sarakauskas’s 2nd place and qualification for the Final was assured. Natasha Regan was the highest-scoring female player, and qualified for the Women’s Final with 8 points. Women’s IM Zivile Sarakauskiene and Mahima Raghavendra finished on 7½ points. Sarakauskiene was another late arrival, but was the 2nd place female after victory over Raghavendra in Round 8. Sarakauskiene qualified for the Women’s Final on tie-break. My thanks go to Julian Clissold and Rod Middleton for organising and arbiting this tournament. 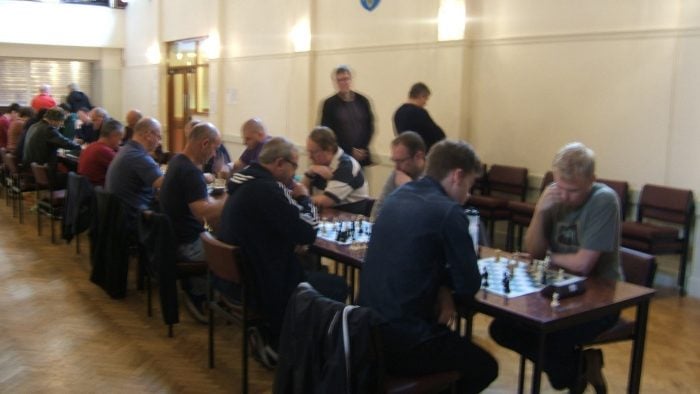 A blurry photo of the Manchester qualifier | Photo by Julian Clissold

Newcastle
GM Daniel Gormally scored 15/15 to win the Newcastle qualifier ahead of two IMs and a number of other strong local players. IM David Eggleston started with 5/8, and was 1½ points behind IM James Adair. The deficit was too much to catch up, as both players won their final 7 games. Adair thus qualified in 2nd place. Rayelynn Posadas qualified for the Women’s Final as the highest-scoring female player with 7 points. One of her wins was in Round 9 against Agnieszka Milewska, who was the second highest-scoring female player on 6½. Milewska also qualified for the Women’s Final. My thanks go to International Organiser and Arbiter Lara Barnes for organising and arbiting the tournament. 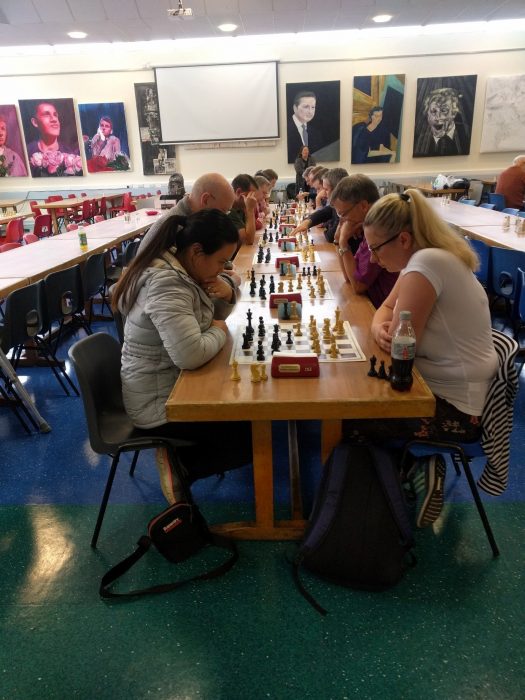 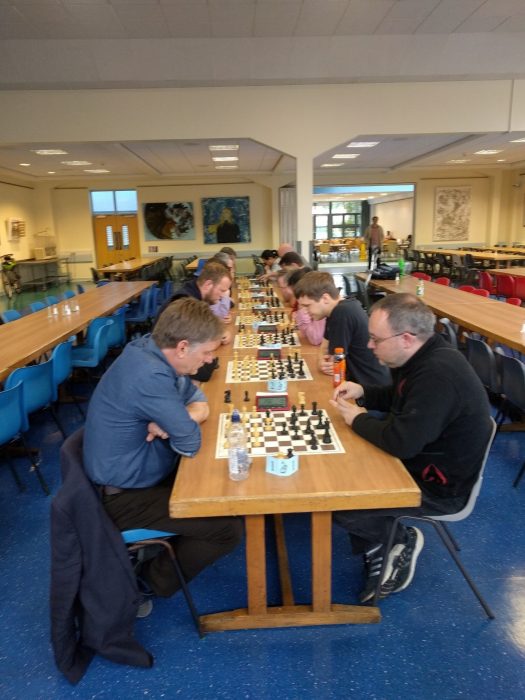