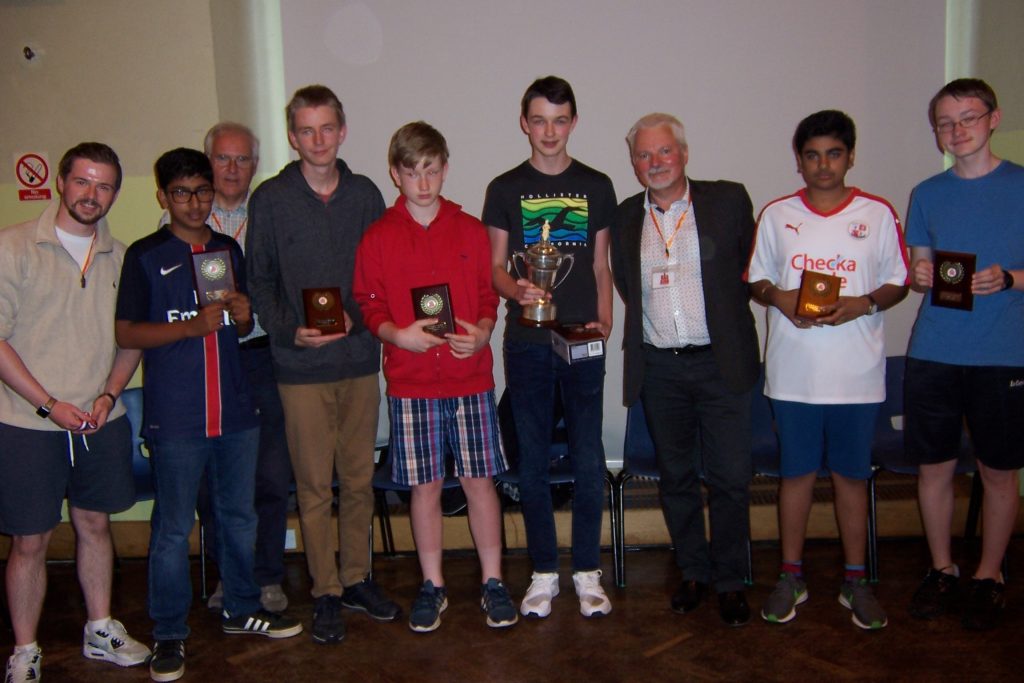 The Champions – RGS Guildford players and staff with Mike Truran

For a full breakdown of the results game-by-game [PDF], click here

This competition, sponsored by Winchester College, is in its sixtieth year.  It began in 1957/8, sponsored by The Sunday Times and then from 1983 until 2001 by The Times.  A total of 130 teams from 92 schools entered the competition this year, with teams qualifying in the Autumn Term for the Spring Term regional matches (2016 Finalists qualified automatically).  There were thirteen regions, with each winner qualifying for the Finals and winning a DGT 2010 clock.  The other three qualification places were determined at a repechage held at Eton College in April; two of these qualifiers, Hampton School and King Edward’s School Birmingham, did particularly well at the subsequent Finals.

Sixteen teams travelled to the Finals at Uppingham School where they played four games over two days, with an hour on the clock, plus 10 seconds increment per move.  Drawn matches were not allowed, so boardcount was used as a tie-break in three matches.   There were some particularly strong players in evidence, including IM (elect) Ravi Haria (234 – see Ravi’s game against Michael Ashworth above) and FM Matthew Wadsworth (220) top boards for Haberdashers’ Aske’s and last year’s Champions, Reading School respectively.  Four other players were graded over 200, nine were 180s or 190s and a further twenty-nine were graded between 150 and 179.  The top seeds were Royal Grammar School Guildford (average grade 176), Reading School (174), Hampton School (172) and Haberdashers’ Aske’s (168).   The Judd School (163) attending the Finals for the first time was also expected to put in a strong challenge, which they duly did.

The first round in the end produced wins for all top eight seeds, but Haberdashers’ had a big scare against Wilson’s, eventually prevailing  4-2.  In the second round, Haberdashers’ lost on boardcount to Judd with other matches largely going as the seeding predicted.  At the end of the first day, the top three seeds, RGS Guildford, Reading and Hampton had won both matches, together with Judd.

In the evening, Neill Cooper masterminded, for the first time at the Finals, a very enjoyable optional seven-round Blitz where players had three minutes and a two second increment for their moves.  It attracted 60 players, including five members of staff.   The Blitz was won by Matthew Wadsworth with 6.5/7 ahead of Ananth Balaji (Queen Elizabeth’s Barnet) and Koby Kalavannan (Hampton) both of whom scored 6/7 and Michael Ashworth (Sir Thomas Rich’s) on 5.5/7.  Sir Thomas Rich’s also had the best team score, aided by a strong performance from one of their teachers, Ian Robson.  This format is well worth pursuing in schools – it is fast, furious and fun and it is hoped that more schools will enter the second Individual and Team Blitz at The King’s School Grantham next March.

The Championship resumed the next morning and saw a re-run of last year’s Final between Reading and Hampton, won last year by Reading on boardcount.  This match did not disappoint and also went down to the wire but Hampton gained revenge for last year’s defeat and won 3.5-2.5.  Meanwhile, RGS Guildford looked in menacing form as they despatched Judd 5-1.  The Final therefore saw RGS play Hampton.  Hampton fought valiantly but had to settle again for second place, losing 2-4 to RGS Guildford, who became Champions for the first time, collecting the impressive silver cup first donated by The Sunday Times in 1957.  Hampton won The Richard Haddrell Memorial Trophy which is new this year; Richard was a dedicated Chief Conductor of the Championship for fifteen years (see separate report).  King Edward’s Birmingham won the Plate for the best performance by first round losers.  The players whose teams finished in the top five positions received engraved plaques, together with the Plate winners, and players in the remaining ten teams were presented with engraved medals.  All the players are to be congratulated on their excellent sporting behaviour; very little arbiter intervention was required.

We are very grateful to the sponsors Winchester College for their continued generosity in supporting this event.  Many thanks are also due to the hospitality provided again by Uppingham School, to Mike Truran, CEO of the ECF, for presenting the prizes and to Richard Haddrell’s sisters, Margaret Haddrell and Judy Stone, who presented The Richard Haddrell Memorial Trophy.  I should also like to thank those who ran qualifying events; Neill Cooper for his repechage tournaments; Phill Beckett, Michael Burn, Neill Cooper, David Matthews and Alan Thorn who administered the regions; certainly not least, Chief Arbiter David Welch, assisted by Phill Beckett (who also took the photos) and Julian Clissold who acted as arbiters at the Finals.