Wilson’s School, Friday 19th September 2014
Two rounds, fifteen teams of 8 split into Major of 7 teams and Minor of 8 teams. Rate of play: all moves in 40 minutes 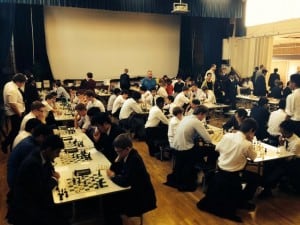 The first round of this new event took place during and after the Eton College Chess Tournament. The 4 problems to be solved are given on this sheet [PDF]

Leading scores after the first round are:
20 points – Kings School Grantham & Westminster Under School
10 points – Millfield and Mill Hill School

(5 points for a correct answer)

The sixth afternoon secondary school event went very well. Sixteen teams from seven schools took place.
It was particularly good to welcome new schools to the event: Sevenoaks, Cumnor House and Putney High.
Quest Academy only took up chess this year but after entering one team in the last event entered 3 here.
Nonsuch also returned having not played at one of these events for a while.
There was a wide range of ability. Whilst some players were graded over 100, the majority were ungraded or graded below 50. Whilst this meant that many of the first round matches were one sided after that there were many close matches.
As with Team Chess Challenge the time limit of 10 mins + 2 secs worked well on the upper boards. Clocks were not used on the lower boards (many players were not used to them) with a few lower boards being adjudicated after 30 minutes play.

Teams left saying how much they had enjoyed the event, including those who lost more games than they won.
One positive aspect of these multi-match events is that most players and teams go away with some successes.

The fifth ECF Afternoon School Chess Tournament at Wilson’s School comprised a total of 18 teams with 4 players in each team. The tournament was run as a single Swiss Tournament, with clocks being used on the top few matches. Each round was allocated 25 minutes so the whole event of 4 rounds lasted 2 hours. Of the schools taking part only Wilson’s and Wallington regularly play inter-school chess. The other schools have only recently started playing inter-school chess. For Quest Academy, Selsdon this was their first ever inter-school chess tournament.

The event was enjoyed by all players, particularly as there were lots of close matches. “Many thanks once again for having us at your tournament. The boys really enjoyed themselves. Please do keep me posted about future chess opportunities. We are going to try and make chess grow exponentially at our school now!” “Thanks for running such a great event: the kids love it! Much more than the one-on–one school matches – this way they get to play 4 games and get to win at least one. My lot were buzzing on the way back! Definitely will be coming to any more events you run!” Wilson’s will host a similar event in the summer term. 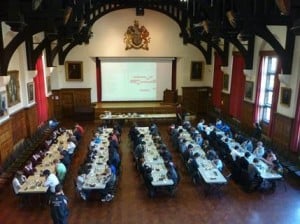 The third ECF Afternoon School Chess Tournament comprised a total of 20 teams with 4 players in each team. The tournament was run as a single large Swiss tournament, with clocks being used on the top three matches.
As well as Wilson’s, the host school, teams from Ewell Castle, Emanuel School, Glyn School and Dulwich College took part. Whilst Wilson’s, Emanuel and Dulwich College regularly play inter-school chess, Ewell Castle and Glyn have only recently started (though in the case of Glyn, this is restarting). It was particularly positive, therefore, that Glyn could enter three teams.

After dropping a point in the first round, Dulwich College A quickly built up a dominant position and comfortably won the event, dropping only 1½ points.
Of the 80 players, just four won all their games: Rohan Bansal and Dooley O’Khann (Dulwich College), Tharshan Kuhendiran and Kirishoth Sivalogarajah (Wilson’s School)

This event was valuable practice for the new ‘Team Chess Challenge’ to be initiated next year. The event was enjoyed by all players, particularly as there were lots of close matches. Another similar event will be held in the summer term.

The first ECF Secondary School event to be held outside the South East took place at The King’s School in Grantham, Lincs, on Sunday 17th March 2013. Whilst twenty teams entered, some withdrew due to illness or lack of players, resulting in fourteen teams of four playing. It was great to have a spacious playing hall and, courtesy of ECF equipment supplies, digital clocks for all games. The Fischer timing of 25mins + 5 seconds a move was greatly appreciated by the players who got short of time! What is more there were no draw claims under the ‘2 minute rule’. David Welch therefore had a reasonably quiet day as arbiter, but his presence was also appreciated. The event was efficiently organised and run by Phill Beckett of The King’s School, Grantham, who also ran 3 teams. There was a wide range of abilities, whilst a few players graded over 150, the majority were evenly spread between 50 and 150, and about a third were ungraded. The use of a Swiss system based on game points meant that after the first round there were many closely balanced matches and all teams had some success. 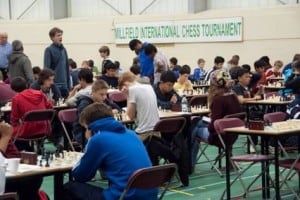 The Millfield International has been taking place for 29 years, firstly as the Marlwood tournament and then moving to the Dragon School, Oxford, Edgarley Hall and now to its current venue of Millfield School. Many of Britain’s leading players have taken part and the winner of the Stephen Joseph Memorial Trophy, for the best Individual performance, sees their name feature alongside the likes of Michael Adams, Brian Kelly, Sam Collins and Mark Ferguson.

The Millfield International is a unique event because with teams of twelve, schools cannot rely on one or two star players, but need a thriving chess community and team spirit to challenge for the top prizes. This year, fourteen teams competed, in an exceptionally strong event. After two preliminary rounds the tournament splits into a Championship and Major sections for the remaining five games. The Championship saw Haberdashers’ Aske’s and Manchester Grammar pull away from their competition and battle it out for top spot. Haberdashers’ clinched victory and their score of 49.5/60 is one of the highest in the competition’s history.
[below – the winning team, Haberdashers’ Aske’s] 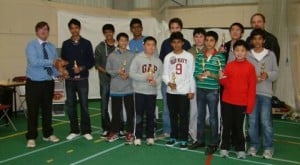 Breaking News
Former Stephen Joseph Memorial winner and World Championships Semi-Finalist, Michael Adams will be returning to Millfield for a Summer Camp the week before next year’s British in Torquay. Watch this space.