The English Chess Federation’s 24-hour charity marathon for Ukraine took place over the weekend of 02/04 to 03/04 on Chess.com to raise funds for the Red Cross DEC appeal in support of Ukraine.

We were also joined by a big contingent of Ukrainian players including GM Mikhail Golubev, IM Viktor Skliarov, Oleksander Matlak (CEO of the Kyiv Chess Federation), Mykola Fuzik, Mikhail Safronov (who finished 6th), and many colleagues joining us from Kiev and other parts of Ukraine.

We had very heartening feedback from the Ukrainian players, including this post below on the ECF’s Open Club on Chess.com

A total of 461 competitors joined the event with over 6,000 games played in total during the 24 hours, making it the largest ECF marathon to date. GM Keith Arkell (left), who played all the 24 hours, won the marathon with a massive score of 728 points with 204 wins, 21 losses and 23 draws across 248 games played. IM Chris Baker was second on 399 points and GM Mark Hebden 3rd on 386 points.

The ECF is delighted to announce that the event raised a total of £18,000 for the Ukraine DEC appeal and we would like to thank everyone who took part and/or donated. A full list of standings and games can be found at https://www.chess.com/tournament/live/arena/ecf-charity-marathon-for-ukraine-1792555

The ECF are very grateful to Chess.com, Chessable, Forward Chess and Elk and Ruby for their generous support. 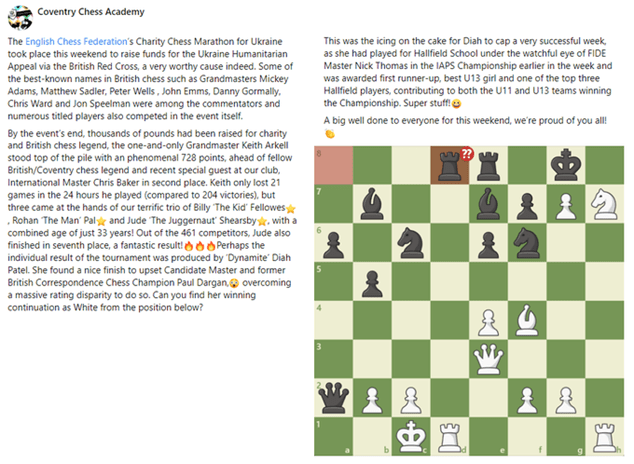