Congratulations to the Chessable English and English Women’s Championship winners! 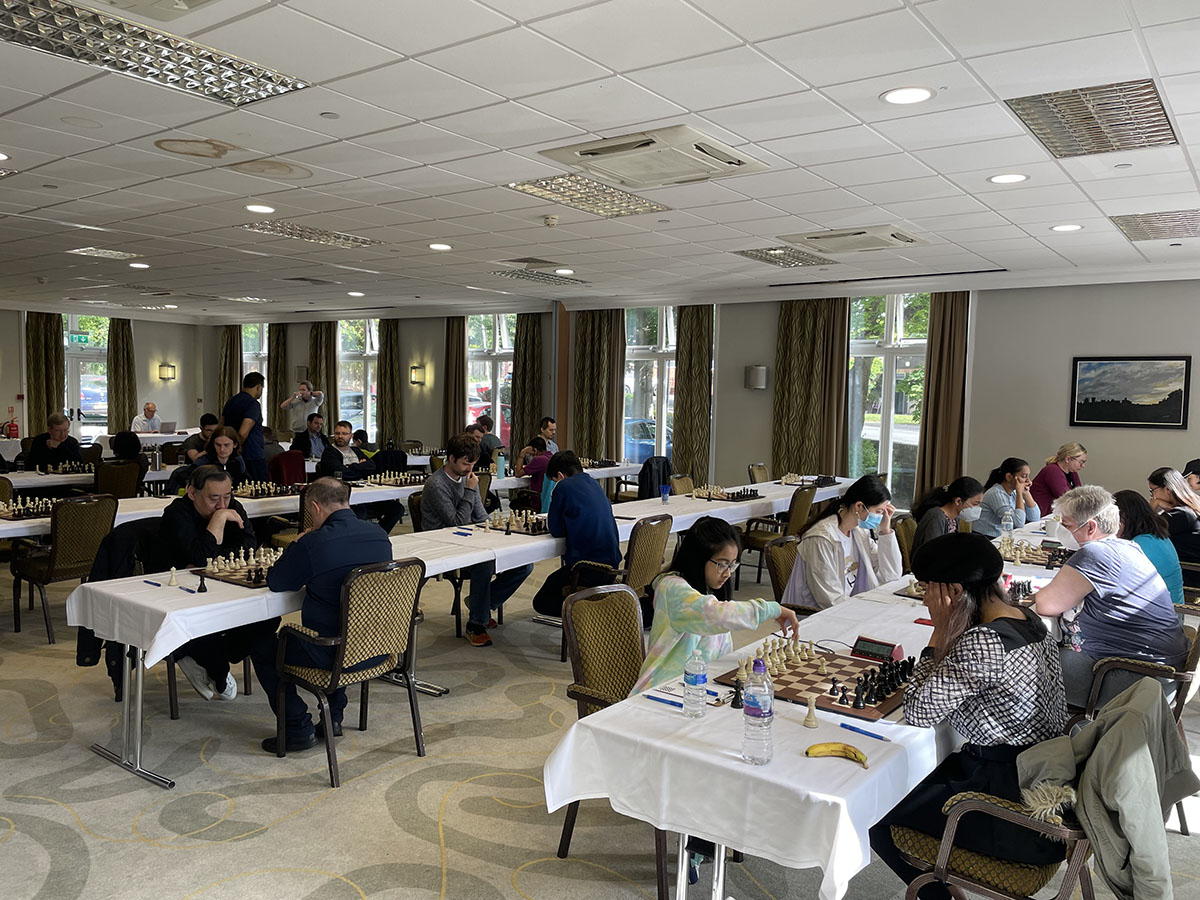 Round 7 started at 10.00 am on Sunday morning (22nd May) with Mark GM Hebden a point clear of the field on 5.5 out of 6 in the Open Championships, and Alaa Gamal half a point clear on 5 out of 6. Mark Hebden agreed a draw against Keith Arkell in an exchange Caro Kann, which was enough for Mark to win the Chessable English Championship to add to his Chessable English Seniors Championship success earlier in the month. In the Women’s Championship Elis Dicen won her final round game against Alaa Gamal, and WIM LAn Yao won her game against Sarah Sengenberger, with Lan taking the lead for the first time in the event to win the English Women’s Championship for 2022.

This is the second stand-alone English Championships, the first being an 8 player all play all in 1991 won by GM Nigel Short – https://www.englishchess.org.uk/100-year-history-of-the-british-chess-federation/4. We will be looking to run the English Championships, English Womens and English Seniors as a set of championship events in April or May going forwards.

Pairings and Results
Tournament details, pairings and results can be found on Chess Results at the links below —
English Championship – https://chess-results.com/tnr638674.aspx?lan=1&art=0&turdet=YES&flag=30
English Womens Championship – https://chess-results.com/tnr638675.aspx?lan=1&art=0&turdet=YES&flag=30

Broadcasts/where to watch the games

Eligibility
Players must be born in England or have lived in England for at least the preceding 12 months. In addition if they have a FIDE registration, it must be ENG.

Capacity
We will be implementing a venue-based limit on player numbers across the two championships.

Further entries will be accepted from all eligible players above the minimum rating of 1900 ECF or FIDE, on a first-come-first-served basis in order of registration, and up to a limit on total numbers for the final.

There will be up to 5 reserved places for general wildcard entries from players who have not otherwise qualified regardless of their rating. An online qualifier event will be organised at the start of May to allow qualification via this route in the event that more than 5 wildcards requests have been received and agreed by the organisers. This will replace the previously advertised April online qualifier.

Further entries will be accepted from all eligible players above the minimum rating of 1600 ECF or FIDE, on  a first-come-first-served basis in order of registration, and up to a limit on total numbers for the final.

There will be up to 3 reserved places for general wildcard entries from players who have not otherwise qualified regardless of their rating. An online qualifier event will be organised at the start of May to allow qualification via this route in the event that more than 3 wildcards requests have been received and agreed by the organisers. This will replace the previously advertised April online qualifier.

Ratings
The higher of FIDE rating and ECF rating will be used in determining potential qualification. In the event that a player has neither an ECF nor a FIDE rating, the organisers will assign an estimate based on available data on a case-by-case basis.

Time control
Game in 90 minutes per player with 30 second increments from move 1.

Entry fees for either of the finals
£60.00
Players must have Gold or Platinum ECF membership.
GMs, WGMs, IMS, WIMs – free entry
FMs, WFMs – half price entry

Latest date for entries
Monday 16th May for direct entries and registrations, with registrations subject to an earlier closing date if the capacity limit is reached.
Players qualifying by way of their FIDE title will be offered free entry

Rating
The event will be FIDE and ECF rated

Performance prizes are based on best W-We tournament performance for players within the specified category.
The first placed player not already qualified for the Chessable British Championships will qualify for the Chessable British Championships in August as the English nominee. No player may win more than one prize. Unrated players cannot win a performance prize.
In the event of a tie for first place in either championship, the award of the championship trophy and the title will be decided by a playoff.
Ties for second or third place will be determined by tie break using the following methods applied in the specified order  —
(a) Direct Encounter (b) Median-Buchholz (c) Buchholz Cut 1 (d) Buchholz
All place prize money will be shared equally between tied players.

Pairings
Pairings will be made using the Swiss Manager program. Players failing to arrive in the playing area within 30 minutes of the start for each round will be defaulted. Players whose opponents default will be offered a re-pairing if possible.

Refreshments
Only refreshments obtained at the hotel may be consumed on the premises.

Entries
Entries are now closed for these events. Entrants lists can be found here

Accommodation
Follow this link to the booking form, then click ‘PROCEED’ and follow the booking instructions. The start date on the page (18th) is for guidance only.

Title Sponsorship
We are very pleased to announce that this year’s British Championships is being sponsored by Chessable as a primary learning partner of the Federation. Chessable are part of the PlayMagnus group and providers of the MoveTrainer® software. For further details see the Chessable website here –