Welcome to the October edition of the ECF eNewsletter. With the season underway we are ready for a terrific Autumn with the world championship and London Chess Classic coming to London in November and December. We also look at the Chess Olympiad and FIDE election at Batumi, Georgia, introduce a new caption competition and feature another chess op-ed by the inimitable Tim Wall. And there’s a feature on Carl Portman excellent work showcasing chess in the UK’s prison system.

The ECF’s AGM takes place on Saturday 13.10.18 in Birmingham and I would like to take the opportunity of thanking Alex Holowczak and Traci Whitfield for their outstanding work as Director of Home Chess and Director of Junior Chess and Education, as both are standing down from their roles.

Finally, a great initiative by Phil Makepeace who runs the ECF social media with the first of a regular caption competition below. I’m expecting a big response!

I am always happy to advertise your events, tournaments and leagues and if you have an opinion about chess that you want to get off your chess please send me around 400-500 words and I will consider it for publication. Please email me at publicity.mananger@englishchess.org.uk

The Open team of Mickey Adams, Luke McShane, David Howell, Gawain Jones and Nick Pert (expertly captained by the seasoned Olympiad campaigner John Nunn) achieved the best England result since 1996. A total of 17/22 match points secured 4th equal (5th on tie-break), behind only the chess superpowers China, the USA and Russia, with only the losses being to Russia and Azerbaijan.

Mickey Adams was a very solid board one, scoring 6/10, Luke McShane on board two scored vital match-winners to total 5.5/10, David Howell on three was a megastar with a fantastic 7.5/10 (his only loss was to Vladimir Kramnik), and Gawain scored an excellent 6.5/10. Fifth board Nick Pert did exactly what was required, giving boards one to four a day off each, scoring 2/4. All-in-all, a very impressive, disciplined team performance!

Even though Batumi offered very pleasant weather for late September-early October, a good number of the team suffered from colds throughout the Olympiad making their result even more remarkable. After one (very enjoyable) Georgian dinner I shared with Luke, Gawain, Sue Maroroa Jones and Women’s team captain Lorin D’Costa, the team members went straight off to the chemist’s to stock up on Lemsip and other flu remedies.

Jovanka Houska’s 7.5/9 was a stand-out result (and included a loss to only Scotland’s Keti Arakhamia-Grant, whose 10.5/11 in her native country was the best score of the whole Olympiad). Akshaya Kalaiyalahan with 5.5/9 and Dagne Cuiksyte with 6.5/10 were equally solid, and Louise Head and Sue Maroroa Jones also did a very creditable job (2.5 and 4.5 from eight games each), giving respite to the top boards.

Batumi as a destination was quite charming (it reminded me of the Baku I lived in nearly 20 years ago, before its modern construction boom had really taken hold), and the England team hotel the Coliseum Marina was perfectly situated on the sea front (it was also, slightly bizarrely shaped like the Coliseum in Rome, with staggered edges). Variable quality in hotel catering meant the England teams quite often ventured out for Georgian cuisine in local restaurants, where the food was very good and importantly, served hot!

Overall, the team spirit among the Open and Women’s teams was excellent, and the whole experience must definitely give cause for optimism for future Olympiads.

Walk the Dvork
Arkady Dvorkovich from Russia won the FIDE presidential election, also held in Batumi beating Georgios Makropoulos after Nigel Short had opted out of the race on the morning of the election and offering his support to Dvorkovich. The ECF had supported the Makropoulos ticket which included Malcolm Pein as a potential Deputy President.

Boxing clever
Coventry Chess Academy social enterprise founder Paul Lam has taken the brave step of getting into a boxing ring with one of the UK’s top heavyweight fighter Dave Allen to raise money for the son of Paul’s work colleague son who has a rare form of cancer. More here about the story – https://uk.virginmoneygiving.com/fundraiser-display/showROFundraiserPage?userUrl=PaulLamChessBoxing&pageUrl=1 and here – https://warwick.ac.uk/fac/cross_fac/enterprise/voices/plam-ccc/

Off the Wall
Another great chess opinion piece from FM Tim Wall – https://www.englishchess.org.uk/wp-content/uploads/2018/10/Tim-Wall.pdf

Never too late
Peter Gayson got his first IM norm at the European Senior Championships in Drammen, Norway – https://www.englishchess.org.uk/peter-gayson-im-norm/

It’s a fair Kop, Trent
Magnus Carlsen took on Liverpool FC defender Trent Alexander-Arnold, who was coached beforehand by ECF juniors Shreyas Royal and Kyan Bui. The world champion won in 17 moves but we are very grateful to Trent for giving his support for chess to attract more young players. More here – https://www.bbc.co.uk/sport/45786786

… and Malcolm Pein took on Tony Livesey on Radio Five Live on 8.10 with WFM Sarah Longson, Shreyas and Kyan in the studio providing an excellent half hour of chess chat. You can listen here – (slide timer bar to 2hr.35m)

As we are about to host the Carlsen-Caruana World Championship match in London (November 9th-28th), it seems that now is a brilliant time to reach out and recruit new (and returning) people into chess. Without abandoning our traditional forms of the game, such as leagues, weekend tournaments and county matches, we also need to reach out beyond our existing clubs and find a new audience, through social chess in cafes, pubs and libraries. One example that clubs could be inspired by is what Simon Williams (aka the ‘Ginger GM’) is doing during the World Championship – holding a “chess festival” of online commentary (with a live audience) and blitz in a London pub. Taking a leaf out of Simon’s book, clubs around the country could organise a fun evening down their local, streaming live commentary on a large-screen TV or projector screen, and attracting newcomers with a (World Cup football-style) Fan Zone. Some of these new formats are already catching on. The ECF’s inaugural UK Blitz Championships, with their successful regional qualifiers in September attracted 340+ players, and the national finals on December 1 are a clear sign of the potential. A lot can be achieved if we don’t panic, but just give it a go.

BBCA Rapidplay
Moustaque Choudhury, Secretary of the British Bangla Chess Association, is advertising the excellent BBCA FIDE-rated Rapidplay on 11.9.18 at the London Enterprise Academy E1. They have only 120 places available and they will be taken very quickly so book your place ASAP. Leaflet here and entry form here – https://form.jotform.com/81766005914963

If the caption fits
The first of a monthly competition where we are asking you to submit a caption for a topical photo. Your editor and Phil Makepeace will be judges and the winner will get either a free Gold membership to the ECF or if a current member, will get an upgrade of your membership.

So for our opening move we feature a picture of Mickey Adams at the Olympiad. Over to you to get the creative juices flowing. Please send your caption in (maximum 10 words) to publicity.manager@englishchess.org.uk by October 30 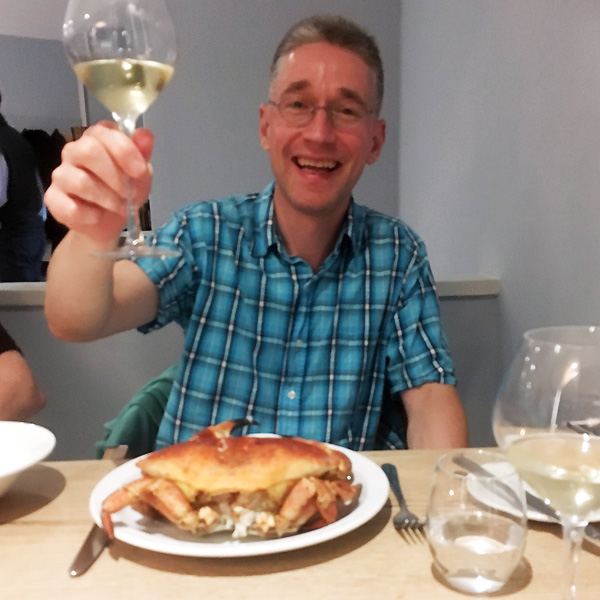