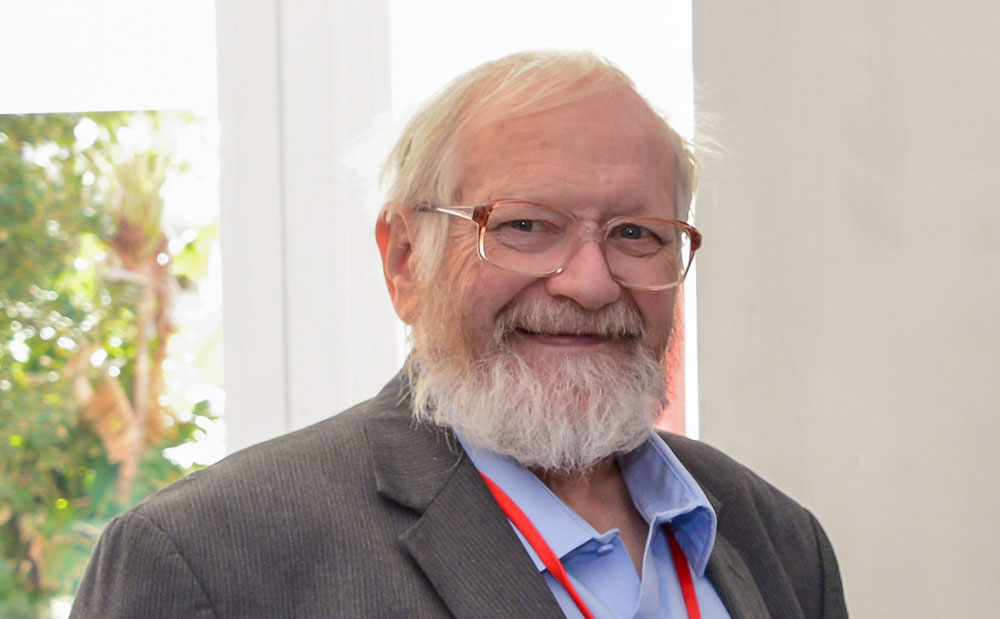 It is with great regret that we report the death of David Welch, the former Chief Arbiter of the ECF and the 4NCL. As is generally known, David had been unwell for some time and died peacefully early this morning.
Picture by John Saunders

Dave, as he was known to almost everyone, was born in Brampton, Chesterfield and attended the local Grammar School before going on to Queens’ College, Cambridge where he was the Librarian and Bulletin Editor for the chess club. He moved from Wallasey CC to Liverpool CC in 1968.  He was eventually to become its President.  He played a significant role in organising the Liverpool Chess Congress which in its day was a massive event.

He joined the arbiting team of the British Championships in 1981 eventually becoming its Chief Arbiter and Manager. Within the ECF (and its predecessor the BCF) he was the Manager/Director of Congress Chess and Chief Arbiter. He was awarded the ECF President’s Award in 2007.

As well as being Chief Arbiter of the British and numerous local congresses, Dave had served as Chief Arbiter at the Gibraltar and Isle of Man Tournaments.

While in Gibraltar in 2017 Dave suffered a stroke, which left him debilitated. As a result of this he was unable even to visit a chess event and passed away in hospital at 6am on 9 November.

The above are the bare facts.  They do not come close to giving an indication of the tremendous amount of work and effort and success David had in promoting the game he loved. Dave was just as happy working on the Minor Section of a weekend congress as he was being arbiter of a Grandmaster event. He was always happy to pass on his knowledge to less experienced arbiters who showed a willingness to learn.

Dave had no immediate family in the normal sense but he has left behind his family of chess players who will miss him greatly.

‘A great servant of British chess’ – Nigel Short
‘He loved arbiting at all types of events, whatever the format and whatever the strengths of the players’ – David Sedgwick
‘David Welch contributed so much to British Chess as an arbiter and organiser over so many years’ – John Saunders
‘It was always a pleasure working with him’ – Jack Rudd
Lara Barnes – click here for pictures and comment
‘A gentleman of the chess world’ – Howard Wood
‘He was always a great encourager of people; a good arbiter and an astute judge of character’ – Alan Atkinson

Dave was a great inspiration and mentor to me. I first met him in 1985 at the British in Edinburgh. We worked together every year after that at either the British, Blackpool or Hastings until his stroke in 2017. At one of the British Championships at Eastbourne we were using a complicated Swiss pairing system which was reserved for the British Championship only. The system was supposed to produce a unique pairing.  We both came up with different pairings on one scoregroup. A check showed that both pairings satisfied the rules. When David saw my solution to a problem he thought it neater than his but not content with that he applied the same logic to a different scoregroup where a similar problem had existed.  The outcome was a third version which became the published version. The special rules were abandoned at the end of that event!
David also had a love of beer. When we were at the Olympiad together in Baku I would go out and get some nice dark beers which we both preferred to the mass produced lager that was on sale in the hotel bar. We sat together most evenings , downing a beer or two, chatting and putting forward suggestions for revisions to what was to become the 2017 Laws of Chess. One of these suggestions, regarding illegal positions, appeared in draft version 7 only to disappear in draft 8 which appeared only a few hours later and before we had finished our beers!

David was born in Chesterfield on October 30th 1945. He was educated at Chesterfield Grammar School where he both played and organised chess which his father had taught him. After a successful career at school he moved on to Queen’s College Cambridge to study Physics.  There he played for Queen’s at chess and, believe it or not, was a cox in the College eight. After four years at Cambridge he qualified with an MA and got a job at Liverpool College as junior physics teacher in the Upper School (current Y9 and above). He started in September 1968 which was also when I started. I taught History and Sport, especially Rugby and Swimming, in the Lower School (Ys 5-8) so at first we did not see a lot of each other. I had played chess at University and agreed to start some teams in the Lower School in 1969. I remember meeting Dave at “The Tram” the staff pub, and we both mentioned that we would be able to drive the minibus after half term. It was then we found out we were both born on the same day – but in different countries. David was living in a College Flat in Croxteth Road and when Ann and I got engaged I was lucky enough to get the flat above Dave’s. Dave remained the owner of his flat until his death although I moved to Wallasey in 2008.

After a couple of years running school chess during which time Dave became a BCF Judge he persuaded me to start doing Adult Congresses and I followed him down the path of International Arbiter and BCF Senior Arbiter. I remember Stewart Rueben saying that there would never be any law disputes when Liverpool College were playing! I am afraid I do not remember the exact dates when David moved up the arbiting ladder but he did become chief arbiter of the British Championships and also chief arbiter of the BCF (later ECF). We also started taking holidays together and travelled to Ethiopia, Libya, Jordan, Guatemala, Honduras, Crimea, Lithuania, Finland, Estonia, up the Hurtigruten, Rumania, Bulgaria, Czech Republic and many other places. We also took school holidays – Dave did the finance and was very cheesed off when the Euro arrived as it was far too easy!

David retired due to ill health in 2000 but this did not stop him travelling or running chess. He did go to Azerbaijan for the Olympiad. Both of us had been involved in chess at Gibraltar from the start of the tournament and visited over 65 times. Sadly it was in Gibraltar in August 2017 that Dave suffered a severe stroke. He survived it but was left totally paralysed down the right side. He went in to Arundel Park Care Home where his many friends visited him. Gradually his health deteriorated and on 7th November he was rushed in to Royal Liverpool and passed away peacefully on Saturday 9th November.

He will be remembered as a true gentleman, polite, caring, hard working and with an excellent brain. His contribution to English Chess has been immense and he will be sorely missed.

I have just heard the sad news of the death of David Welch, who contributed so much to British chess as an arbiter and organiser over so many years.

Dave was born in Brampton (Chesterfield), Derbyshire, on 30 October 1945. After attending Chesterfield Grammar School, where he captained the chess team, he took a degree at Cambridge University before taking up a teaching job at Liverpool in 1968. Also starting teaching the same day at the same school was Peter Purland, who like Dave was to become an equally distinguished servant of British chess over the past half century. The two spent their entire teaching careers at the same school, and often worked in tandem as arbiters and organisers over the same period of time and long into their retirement from teaching.

Dave joined Liverpool Chess Club in 1968 and eventually became its president, and organiser of the Liverpool Congress. He became involved in organising and arbiting at British Championships in 1981, later taking on roles as chief arbiter of the British (later English) Chess Federation and director/manager of congress chess. He was also chief arbiter of the 4NCL for some years. He was awarded the FIDE International Arbiter title in 1977 and the FIDE International Organiser title in 2010. He received the ECF President’s Award in 2007.

I first came into regular contact with Dave at the Isle of Man and Gibraltar tournaments where he also officiated as chief arbiter for some years. His vast experience of chess organisation made him a safe pair of hands, and almost the automatic go-to man when a major congress needed someone to take charge, as happened at the Monarch Assurance Isle of Man tournament when Richard Furness passed away. Dave’s firmness of resolve and stentorian voice (albeit not quite matching the molto fortissimo of his Welsh colleague Peter Purland) will remain a particular memory of these events. These schoolmasterly traits gave way to a more whimsical personality, and a wicked sense of humour, when off-duty over a pint in the bar at the end of play. One small example: when musing over the experimental one-game knock-out tournament format being proposed by Stewart Reuben for the Hastings Congress in 2004/5, Dave told me, “if it works, we will call it the Hastings System. If it doesn’t work, we will call it the Reuben System.”

Dave died on 9 November 2019 after suffering a stroke which left him greatly debilitated some two years ago. His is a great loss to British chess. I shall miss him greatly. RIP.

A further tribute from FIDE can be found here