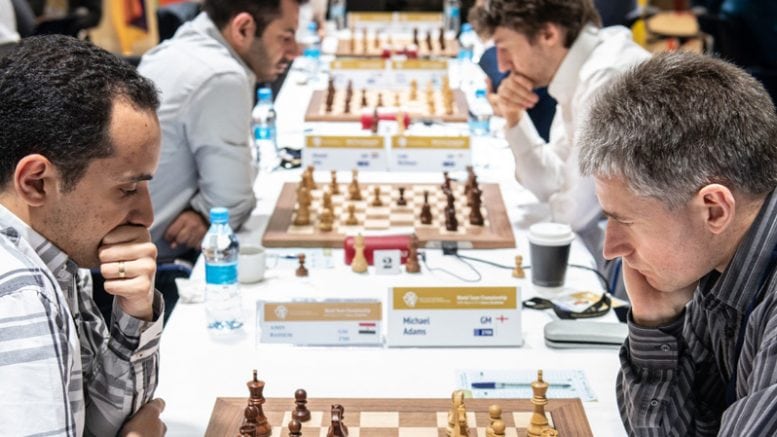 A fantastic all-round team performance has secured England its first-ever Silver medals in the World Open Team Championship in Astana, Kazakhstan (held March 6-14). The medals are the first for England in a major team competition since they won Gold in the 1997 European Championship.

England’s score of 13/18 match points put them in second place behind Gold medallists Russia (16) but ahead of defending champions China (Bronze, with 12) and India (11).

The England team of Mickey Adams, Luke McShane, David Howell and Gawain Jones, plus reserve/analyst Jon Speelman, proved more consistent as a unit than other higher-rated teams, scoring a total of 5 match wins, 3 draws (including against Russia and India) and only one loss (to China). Luke McShane on Board 2 and David Howell on Board 3 were the highest scorers for England with 6/9 each, while top board Mickey Adams scored a valiant 3.5/9 and Gawain Jones on Board 4 scored 5.5/8.

Against Iran, an unwell Jon Speelman heroically stepped in for one game in place of an even more unwell Gawain Jones. What might have spelled trouble turned into a magnificent 3-1 victory, however as Adams, McShane and Howell all won.

The Astana result is a remarkable triumph for the England team, which qualified by virtue of a superb fifth place at the 2018 Batumi Olympiad. It was the first time England had qualified for the World Team Championship since 1997.

Especially notable from a historical perspective is the fact that Adams and Speelman were also part of the Gold-winning England team at the 1997 European Championship, and that Speelman won Bronze medals for England in the 1985 and 1989 World Team Championships.

The team was captained by ECF International Director Malcolm Pein, who said after England’s final round 3.5-0.5 victory over Sweden, “This was an amazing team performance, only made possible by invaluable support from The Scheinberg Family. All chess players in England can be justifiably proud of our national team today. We showed in Astana that although our teams do not receive the official and financial backing of many of our rivals, our resilience and team spirit are second to none. I’m looking forward to our next outing at the European Team Championships this October.”