I visited HMP Leicester on Tuesday 5th December 2017. This is a Category B men’s prison with a fairly transient population. It is the only prison that I have visited twice. I returned chiefly to meet the new governor and to check on progress at the prison since I first visited a couple of years prior.

I set off early at 6am in the dark and cold but had a sunny feeling inside as I always do on a prison visit – which is after all the business end of my work.

I met with the governor and deputy governor, both of whom support chess at the prison. I donated two chess sets, wooden boards and five copies ‘Your first chess lessons’ by Paul van der Sterren on behalf of the ECF. I also donated a copy of my own book ‘Chess Behind Bars’ for the library.

I had two sessions; one in the morning for one group of prisoners and another in the afternoon for a different group. Both were interesting and rewarding in their own right.

This was a mix of coaching using a demonstration board and playing a simul against all comers – which is always the favourite event in prisons. Prisoners were delighted with the donated equipment and asked lots of chess questions. They also wanted to meet and play chess more regularly.

This was a group of so called ‘vulnerable prisoners’ and a quite different atmosphere from the start. I played on the prison wing itself, giving a simultaneous display against several inmates. It was a rambunctious start with lots of ‘trash talk’ and high testosterone levels (but enough about me!) and those that were no playing were watching from prison landings, often shouting out expletives so the pressure was on to win them over – which I believe I did. 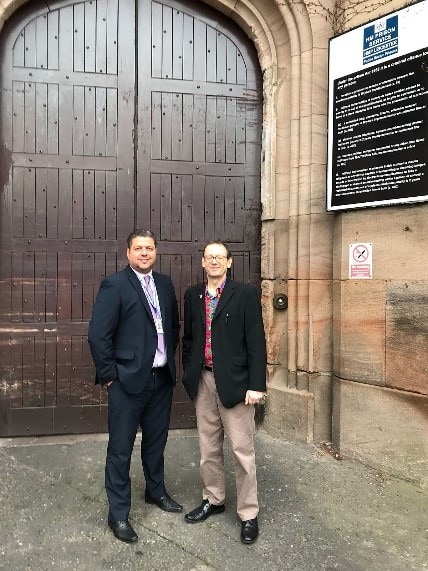 One cannot be a wilting flower in this environment, which can seem hostile but if you focus on the chess, choose your words carefully and explain that you are doing this voluntarily then the chances of having a smoother session increase. Engaging in banter is a pre-requisite for this role. The players here were not as strong as in the morning session, but no less keen. I played several games including a couple of inmates more than once, and when I was winning I turned the board around so that prisoners could enjoy finding the wins and ‘finishing me off’ which they endeavoured to do gleefully! Note that at least one chap would not do this and wanted to fight on with his own game, which was very admirable.

I don’t mind, it is an excellent method for building confidence and getting inmates to focus on making decisions. Once again, the discipline of knowing how to lose came into play. There is no-one to blame but ourselves in chess so we must learn to accept defeat, learn from it and then move on. It’s a tremendous analogy for life and one that inmates understand, though it is particularly difficult for some to come to terms with it in an environment where one-upmanship can be everything.

The day ended with handshakes and pleasant exchanges and everyone seemed happy. I am grateful to the Governor for allowing the visit and to Louise and Alistair for looking after me on the day. I hope very much that chess continues at HMP Leicester. The throughput of prisoners can be quite rapid but there is no reason why the chess club should not be a fixed option, giving everyone access to the wonderful game of chess and the opportunity to enrich their own mind in a productive way.

Thank you to the ECF for supporting the visit.