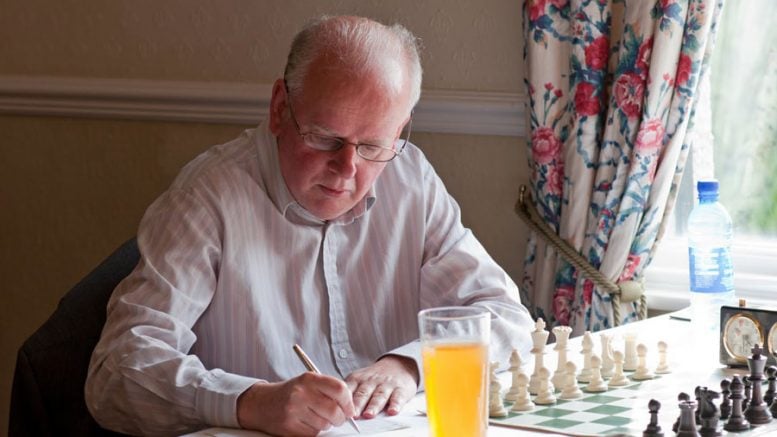 Born in Dewsbury, Yorkshire, Steve studied History the University of Hull. In 1972 he travelled to Iceland to watch the Fischer-Spassky World Championship match, hitch-hiking part of the way. Later that decade he worked for Chess Magazine, producing How Good Is Your Chess articles. In 1980 Steve drew with Viktor Korchnoi in a simul in Germany (where he was working as a technical writer). This was one sign of his improving strength and further evidence was provided when he became Middlesex Champion upon returning to England. By 1990 he had moved south of the river and won the Surrey Championship. This was the first of a record 12 titles (one shared), the last one coming just last summer.

Of his many tournament successes, special mention must go to his exploits in Leuven, Belgium. Despite this Open often attracting several grandmasters, Steve won in 2009 and came second in 2000 and 2005. Artur Kogan, Vyacheskav Ikonnikov and Ralf Akesson were among his grandmaster victims.

Steve played a lot of team chess and was reliable, helpful and friendly in addition to being very strong – every captain’s dream! He played for Hendon, Kings Head, Mitcham and Wimbledon (playing his last match just weeks ago). He also helped both Middlesex and Surrey win a number of National Open County titles.

As Steve moved into his sixties his chess strength did not decline as one would normally expect. Indeed Steve achieved an ECF 220 grading at 61, a level he last achieved aged 50. This impressive feat was repeated four more times. One factor in this was a quest to gain more from the opening and avoid becoming too predictable in the database age. His 1, e4 repertoire generally avoided main lines and switching to the English, he sought more strategic middle games he was both comfortable with and that posed greater problems for opponents. Steve played a number of senior events, clearly enjoying the camaraderie they generated. He shared the British Over 65s title in 2017 and was a member of the fifth- place English Over 65s team in the World Team Championship in 2018.

Outside of chess he was very interested in classical music (especially Schubert), cricket (watching his beloved Yorkshire) and politics. He was always questioning established beliefs, which led to very interesting views and made him a pleasure to converse with.

Steve had many friends, attracted by his intelligence, good nature and dry sense of humour and he will be greatly missed.